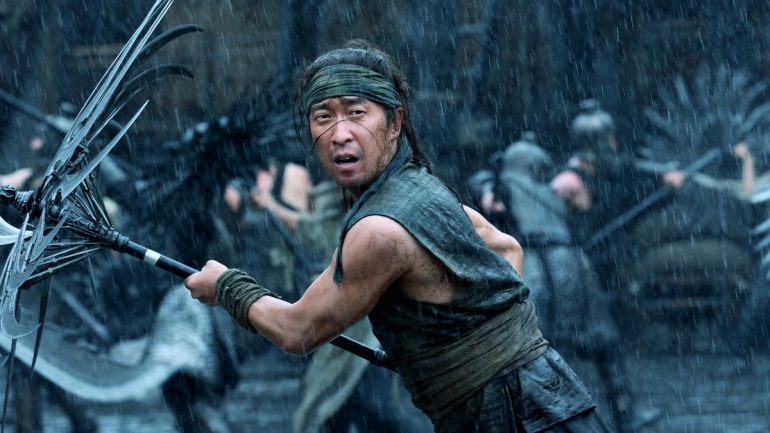 Shadow is another visually stunning potential classic from Zhang Yimou with some incredible set-pieces in the second half. It may be slow to get going and it is a little hard to follow at times but it’s definitely worth your time.

Plot: To finally achieve victory over a rival kingdom, a brilliant general devises an intricate plan involving his wife, a look-alike and two kings.

Review: Zhang Yimou is one of the most talented visual storytellers in cinema today; every movie he makes looks exquisite and Shadow is no different. Where his previous movies Hero and House of Flying Daggers used a varied colour palette Shadow uses mostly different shades of grey; it still looks stunning with every scene looking like it could be a painting.

The colouring works in determining the characters shades of grey so we have no real heroes with characters of questionable morals but there’s a constant sense of intrigue as we try to discover where the plot is going.

There is some romance like Hero/Daggers but it is more in the background as this movie is more about the machinations of our characters with excellent performances from our cast. Deng Chao steals the movie as the Commander coming off as quite insane at times but he’s always magnetic on screen.

I’ll admit I found the first half a little hard to follow so it benefits from several viewings to make sure you catch everything. Some may find it rather slow but the second half of the film is worth the wait with some stunning set-pieces and fight scenes. It’s very much an arthouse film so if you didn’t like Hero or House of Flying Daggers then Shadow probably won’t win you over but your patience is rewarded.

The assault on Jing is arguably the highlight of the tale as the silent army uses metal umbrellas as weapons and defence in one of the most imaginative and jaw dropping sequences of the year.

I don’t want to say anything else and spoil anything about the story so this will be a very short review; I’m not sure Western audiences will really take to this movie but I still think it will find an audience.

Overall, Shadow may take a while to get where it’s going but it’s worth the wait and one of the most visually stunning films of recent times. Shadow is released in limited theatres this weekend.