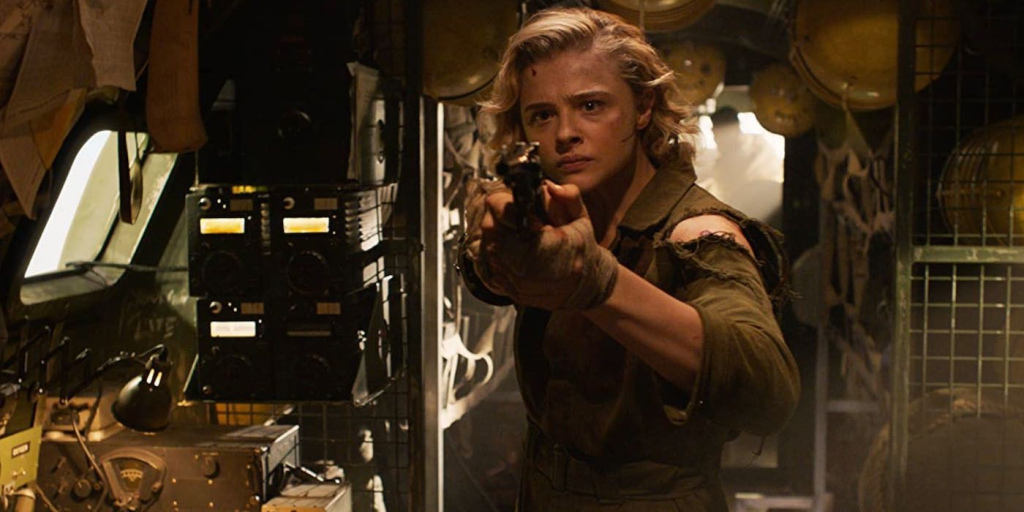 The film defies all logic and common sense but Moretz’s heroic and sympathetic performance reels it in and makes you want to watch it.

Plot: In the throes of World War II, Captain Maude Garrett joins the all-male crew of a B-17 bomber with a top-secret package. Caught off guard by the presence of a woman on a military flight, the crew tests Maude’s every move. Just as her quick wit is winning them over, strange happenings and holes in her backstory incite paranoia surrounding her true mission. But this crew has more to fear – lurking in the shadows, something sinister is tearing at the heart of the plane. Trapped between an oncoming air ambush and an evil lurking within, Maude must push beyond her limits to save the hapless crew and protect her mysterious cargo.

Review: Every new year, I always ponder what my first film viewed will be for that year and most of the times, I’ve seen some pretty good films but of course there have been times where I’ve wanted a do-over. This past year saw the release of the absurd action-thriller Rogue which saw Megan Fox of all people starring as a battle hardened mercenary battling rebel militia and a ferocious lioness. While every fiber of my being told me that I should hate the movie, I just couldn’t do it and I had one hell of a fun time with the movie. I even thought that Fox did an admiral job in the lead role and I would certainly like to see if she could do it again.

Well, it didn’t take long for another movie like that to appear and once again, I felt like I should immediately hate the movie but even though it was slow to get going, I once again saw myself having a good time with it. The movie in question is called Shadow In The Cloud and this time we have another female action hero lead in Chloe Grace Moretz. The movie which is helmed by Roseanne Liang feels like a movie that Robert Rodriguez would have directed or better yet John Carpenter back in the day. It’s totally absurd but if you turn your brain off and don’t expect much, maybe you’ll have fun with it too.

The movie centers on Moretz who is a Flight Captain named Maude Garrett tasked with securing a top secret package and to deliver it to a top secret locale. She joins the all-male crew of a Flying Fortress and at first, the crew takes any and all chances to sexually harass Maude who just wants to complete her mission. They don’t know her snd they don’t trust her plain and simple.

As the plane takes off, Maude begins to notice that they are not alone and unfortunately, with enemy forces closing in, she has to also contend with a sinister evil as well as enemy fighter planes and find a way to save her crew and keep her package safe. What basically transpires for the film’s quick 83 minute running time is an over top action film that would give an entry in the Fast and Furious franchise a run for its money in the illogical action set piece department.

The initial first half of the film is interesting and most of it consists of Maude sitting in the under carriage of the plane in the gunner turret. The audience only sees her for a good portion of the film and after we are initially introduced to the crew, we only hear them over the intercom as Maude converses with them. I won’t lie as I found this a little cavalier and it’s a bold choice and Moretz is up for the challenge as she is literally the only person on screen for a good deal of time. Fortunately, the second half of the movie is full out balls to the wall with some of the most ridiculous action sequences to be had as we are introduced to the film’s mysterious creature to which Maude must confront and fight. It’s literally on scale with the Fast and Furious films and I expecting to see The Rock to show up at anytime.

Moretz does a solid job with the lead role and she is literally thrown around for the second half of the movie and refreshingly, we get to see the monster that is playing havoc with the plane and it doesn’t look half bad as effects go for a movie that doesn’t have a massive budget. This movie lives or dies with Moretz and she really pulls it in and delivers a very physical and exhausting performance and you can’t help but root for her to survive and sin the day. There is a twist to her character that I, of course, won’t mention but I thought it gelled quite nicely with the narrative.

Unfortunately, the rest of the cast doesn’t fair much better and most of them are very stereotypical in the sense that they are over the top male chauvinists and aside from Taylor John Smith who plays Walter Quaid and Hawaii 5-O’s Beulah Koale, I really didn’t care if they lived or died as they were throw away characters that didn’t add anything to the story. We also never really see them in person so it’s hard to connect with any of them.

This is Moretz’s film though and she basically puts the whole thing on her shoulders and brings it over the finish line. Moretz’s Maude is a sympathetic character as well and after a long monologue where we get to know more about her, we grow more attached to her and with that we want to see her complete her mission. I won’t spoil what’s in the package but I will say that I never saw it coming and once I knew, it upped the dramatics to whole other level. I applaud Liang, who did extensive rewrites on the script after initial screenwriter Max Landis was accused of sexual misconduct, for doing this in the plot as it makes the stakes even more higher, especially when Maude has to confront the gremlin which looks a lot like a huge vampire bat.

It’s the last 30 minutes or so that makes the film worth watching as the audience is treated to one insane and ludicrous action moment after another and once again Moretz is in fine action form. She literally falls through a hole in the plane only to be blown right back up into it. Yep, it’s that kind of movie folks. While her male counterparts are having difficulty with what is at hand, Maude takes charge and leads the way. As a viewer, you’ll have to majorly suspend disbelief but if you can just enjoy the ride, it is a whole lot of fun. If you ever wanted to see Moretz slug it out with a demonic creature on an island then this is the flick for you.

I have to give a special shout out to the music in film as it totally pays homage to the John Carpenter helmed movies of the 70’s and 80’s. From the get go, the music draws you in and brings you back to those days when movies like this we’re playing at your local cinemas regularly. As soon as I heard it, my mind was back in 1983 and Escape From New York immediately came to mind. There are other brave musical choices throughout the film and it definitely isn’t your typical soundtrack.

Overall: Just like Rogue, I shouldn’t have liked this movie and while it had major flaws and never really spent any time on character development except for Maude, I found myself drinking the Kool Aid and liking it. Moretz is the real selling point here and just like in Kick Ass, she proves that she can out muscle anyone in the action department. It’s completely insane and absurd in a fun B movie kind of way but with the kind of year we just had, why not enjoy a movie like this. At 83 minutes in length, it’s lean and mean and doesn’t waste anytime. It’s only January, but this is a strong contender for craziest action film of the year. Don’t think too hard and you’ll walk away entertained.