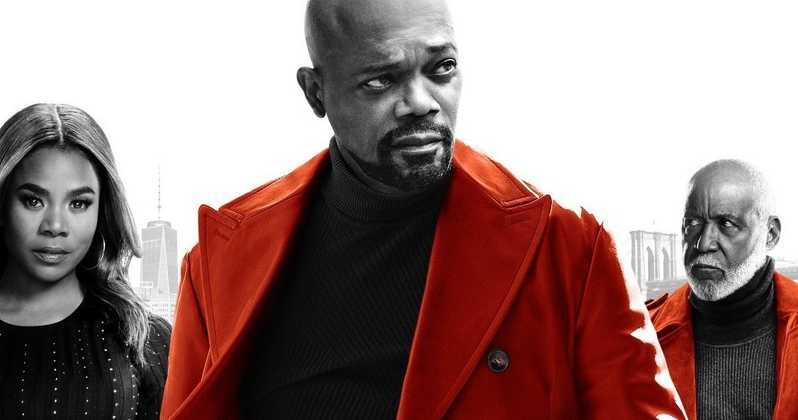 Shaft won’t be for everyone as the lighter tone and lack of grit will put off fans of the original movies but if you go in with an open mind and just enjoy it for the action comedy that it is then you’ll have a blast.

Plot: John Shaft Jr. may be an FBI cyber security expert, but to uncover the truth behind his best friend’s untimely death, he needs an education that only his dad can provide. Absent throughout his childhood, the legendary John Shaft agrees to help his son navigate the heroin-infested underbelly of Harlem, N.Y. Besides, the locked and loaded Shaft has his own score to settle — both professional and personal.

Review: The trailers made the new Shaft movie look more like a parody rather than the gritty urban action thriller that the original Richard Roundtree movies were. Even the 2000 Samuel L. Jackson movie took itself seriously but had a few moments of humour. It also had the added bonus of Christian Bale as the villain.

This latest iteration which was initially called Son of Shaft (which they still should have called it) has had mostly terrible reviews but is actually far more entertaining than I was expecting; it certainly lacks the grit of previous Shaft movies so you’ll have to detach yourself from them and take it for what it is. I was expecting to hate the movie but I found myself laughing more often than not and it’s a lot of harmless fun.

I liked how anti-PC it was with John Shaft (Samuel L. Jackson) berating his son and his generation for being pussies which was refreshing. I was worried Jessie T. Usher was going to be annoying which admittedly he is at first as he is such a wuss but as the story progresses there is no denying he is his father’s son and becomes mildly more badass.

It is essentially a buddy comedy with some witty banter traded between father and son with a few set-pieces thrown in so it moves along well and is never dull. We hear about the villain throughout but we never see them until the end so it lacks any real sense of threat; Bale was one of the best things about the previous movie and this one needed a truly memorable antagonist.

Jackson is at his cool, one-liner spewing best but the movie really shines when the three generations all team up for the explosive finale. It’s a shame we didn’t get more of Richard Roundtree but what scenes he has are worth the price of entry.

The classic theme is used regularly and works well in keeping the smooth vibe going with a decent selection of songs too.

Overall, Shaft lacks the grit of previous entries which will put a lot of people off but if you go in expecting a fun action comedy then you might just have a good time. Can you dig it?