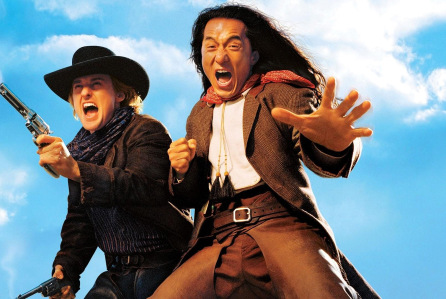 It was announced a few months back that a third entry in the ‘Shanghai” series was in development with Napoleon Dynamite director Jared Hess in line to helm it; there is no word on whether the two leads (Jackie Chan and Owen Wilson) would return but it would be a pointless venture without them.

Anyway, it got me thinking that it had been a few years since I’d watched Shanghai Noon and Shanghai Knights so I figured now was a good time to revisit them and see what the better movie was.

Hard to believe this movie is nearly 17 years old but after watching it again over the weekend I forgot just what a lot of fun it is. Owen Wilson and Jackie Chan make for a really likeable mismatched buddy duo and the action (as you’d expect from Chan) is never less than excellent.

The idea of a martial arts Western may have seemed like an odd idea at the time but for some reason it all just clicks and it’s mostly due to Wilson and Chan’s on-screen chemistry. Sure, Owen Wilson can be the same in the majority of movies but his easy going charm is just perfect for the lovable rogue Roy.

The role of Chon Wang is the kind that Chan can do in his sleep but this is a character that only he could play bringing his nobility, sense of honour and little bit of goofiness to proceedings. The good thing is the tone is just right which doesn’t descend into slapstick. The fights are excellent, although maybe not quite as exciting as some of Chan’s earlier work like Police Story but it’s always entertaining.

I forgot Roger Yuan was the main villain of this movie and he brings suitable menace to the role of Lo Fong and you can never go wrong with Xander Berkeley who plays the other villain (suitably named Van Cleef).

I think Shanghai Noon (and its sequel) are both a bit too long; at just under 2 hours you have to wonder if they could have trimmed a few moments and at times the script isn’t quite as sharp as it maybe could have been. There are still laughs to be had and Wilson especially has a few choice one-liners.

The sequel to Shanghai Noon takes the action to London this time giving the movie a very different vibe from the first movie and frankly it’s not a welcome one. It no longer feels like a Western (which is what I loved about the first movie) and it’s really quite forgettable with little in the way of spectacular action scenes.

The main selling point for the movie though is one Donnie Yen as the main villain and he doesn’t disappoint. He has a decent fight with Chan for the finale but it is strangely underwhelming considering these are two titans of the genre. Aidan Gillen is always a fun villain and it looks like he had some serious sword training for this movie as his fight with Chan at the end was arguably more interesting than the one with Donnie Yen!

The script is rather poor to this one and I only cracked a smile once or twice; there were a bit too many lame moments like the Charlie Chan and Sherlock Holmes references. The British stereotypes were also hilarious but for the wrong reasons.

It’s all still harmless fun but I know which movie I prefer.

For me this is an easy choice and Shanghai Noon is the far superior movie with Owen and Chan on sparkling form. Let’s hope they can rekindle that magic for Shanghai Dawn.