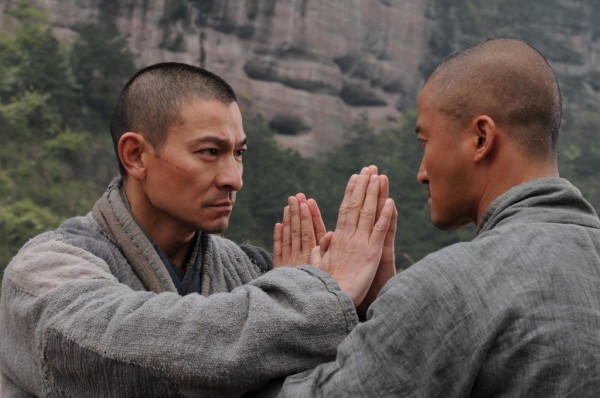 Shaolin isn’t flawless but the moving story, sense of scale and spectacular action sequences make it essential for action fans.

Plot: After ambushing and killing his rival, losing everything in the process, dispirited warlord Hou Jie turns to a Shaolin monastery seeking salvation.

Review: I love a good redemption story and I have to admit that Shaolin is one of the best I’ve seen for several years. Andy Lau stars as vicious warlord Hou Jie and at first you think you will never sympathise with him as he is frankly a bit of a monster.

As the story progresses though and he loses everything he goes to the Shaolin temple seeking salvation; as always though it’s never that easy and what ensues is a bit of a classic action movie.

Lau is fantastic and his character development is believable but you know that he’s done too much to live happily ever after.

The cast includes Jackie Chan, Wu Jing and Nicholas Tse and it really is an epic in every sense of the word.

Nicholas Tse is just a sadistic bastard as Tsao Man but his story doesn’t go the way you’d maybe expect, making this an unpredictable and thoroughly engaging story.

The odd supporting actors aren’t the best actors ever, especially the guy with the beard who has an over the top laughing villain moment towards the end.

Although Jackie Chan doesn’t have a huge part in the film, he still gets his moments to shine and has one of the best fight sequences of the movie.

The final 20 minutes are truly spectacular with real explosions and a real sense of scale… and tragedy.

You won’t exactly feel happy by the end as it’s quite a sad tale but it is genuinely moving and there are a few moments where I had to wipe away a few tears of manliness. One scene in particular involved Shaolin children going up to armed soldiers and asking them to go home to their families.

The music was beautiful and really added to the scope of the film and just made it sound epic.