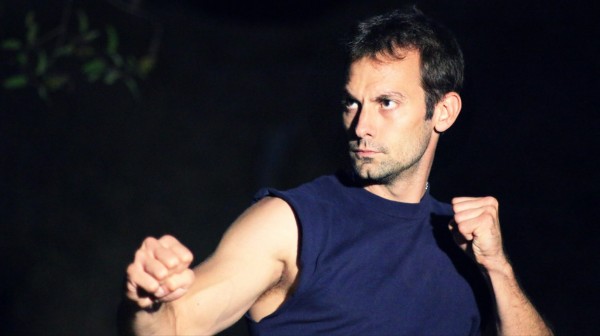 Shaun has worked on X-Men: First Class, Survival of the Fittest, TV Series Numb3rs and more.

He stops by to chat with us about his career and his upcoming actioner The Gathering.

So tell us how you got into martial arts and what is it that keeps you disciplined?

SG: I originally started training in Karate at a very young age. My mother enrolled me because she thought it would keep me out of trouble and excel my work ethic at school. I had hobbies like basketball, poetry and video games but nothing helped me more than martial arts.  I learned quickly that the internal development it provided really aided me in all aspects of life. Not only could I master my body and flexibility, I always felt confident to handle any situation that life could bring. The discipline for me came from seeing my mother struggle and knowing that if I mastered my energy correctly, I could help her in a big way. I was also often bullied at school because I was shorter and didn’t have what every other kid had. So the discipline and the urge to excel at something like Karate came from that as well.

How many hours a day do you train?

SG:  Usually when I’m on a film we work anywhere from around 10-14 hours a day, so on those days I train lightly , usually an hour. On my days off from filming I train three to four hours.

You’re working on a film called The Gathering; how did you get involved?

SG: Jason Scott Jenkins (who plays the lead villain) put me in touch with the director and JohnnyRay and I hit it off very well. Jason and I are friends and I worked with him last year on a film called Criminal.

The story sounds rather interesting too; what was it that drew you to it?

SG: The story focuses on a band of criminals who hide away in a forest after a bank heist, then have to fend off a unique blend of martial artists in order to survive. There’s definitely a lot of darkness to this story but certain characters emerge into the light, and I found that really interesting.

Can you tell us a bit about your character?

SG: I play a character who’s moral compass is a little broken… but nonetheless he has a good heart. He is just… a criminal in the most basic sense.  He will steal, scheme and plunder to the bottom of the criminal world but he won’t rape or murder someone.  For me, finding that perfect balance has been really intrinsic and rewarding.

SG: J-Ray is bringing a lot of creativity to the way he shoots the film, so you can expect a series of different fighting styles. He has some Parkour athletes and a lot of solid experienced fighters involved. There will be some aerial kicks (as seen in the trailer), there are a few really epic shooting scenes and I’m praying he’ll let me do some brutal Muay Thai moves as well. (Laughs) Fingers crossed, hopefully he’s reading this.

You’ve also got an interesting supporting cast including some grandmasters; what did you learn from each other?

SG: What I learned from those I’ve worked with so far is that people fight (or learn to fight) for different reasons. People might learn martial arts because of a previous environment, physical stamina or simply to advance one’s career. We all arrive at martial arts for different reasons, and I think that is what is most awesome. Generally just getting to know strong minded people of different walks of life is always a great experience.

You also do work with some charities; tell us about your work with Outflow in Long Beach?

SG: Outflow is a charity that aids underprivileged kids in Long Beach. They deliver clothes, food and toys during Christmas. I have done some food drives with them and have spent a couple of Christmas’ giving back and donating my time to put some smiles on faces. I sincerely love that work and I believe the genuine goal of fortunate people should be to help the needy when they can. I’ve been coordinating with some of my close associates and my goal is to have my own charity set up and running in the next few months.

[quote] To be able to develop full characters inside and out really enables me to bring a lot to the table.[/quote]

You have several other projects in the works; what can you tell us about them?

SG: I’m really excited to screen and display a film I Co-Produced last year called “Criminal”.  I really am passionate about the story. The director (Denzel Whitaker), really did an amazing job with his original concept.

[box_dark]“After a brutal home invasion claim his wife and unborn child, officer Marcus Taylor becomes a vigilante assassin by night known as Criminal. His battle for revenge is one against Pharaon City’s ruthless crime syndicates who have sunk the city to it’s lowest depths.”  [/box_dark]

The film stars Robbie Amell (The Tomorrow People),  Kevin Phillips (Red Tails), and Jen Yaeger. I think people will really be entertained by this one. There is a lot of violence and a relatable super hero whom will definitely be a fan favorite.

SG: Poetry is beautiful! I used it a lot to express myself as a youth. I still use it occasionally, and I have been thinking about submitting more of my recent work. It’s been on the back burner due to the time it takes to train and build characters, but it will always be a part of me.

You wrote, directed and performed in a Short Play called “The Vision of a Woman”. Do you have any plans to work on any more plays in the future?

SG: I actually would love to turn that play into a film at some point.  The play lightly touches on oppression of women in the Middle East. The overall theme is about their empowerment. I started in theatre and portrayed Gilligan at age twelve, so I’ve always had a love for live art. I’m inspired by Hugh Jackman’s work on Broadway and I could definitely see myself in a musical. Those actors are extremely talented and they train insanely hard. I have such a love and appreciation for that kind of dedication to the art of acting.

Do you have a specific goal or a direction you would like your career to go in or do you want to try different things?

SG: As much as I like Television, I really have been inspired by the process of feature films. To be able to develop full characters inside and out really enables me to bring a lot to the table. Sometimes in television you pop in, get shot (or killed),  and you’re out. With feature films, even at the lower level, the reward is so much greater for me because the heavy work that I do is very visible. There’s more of a commitment needed from the actor…more of a responsibility, and I love that about film making.

Thanks for chatting with us and all the best with your career; looking forward to checking out The Gathering.