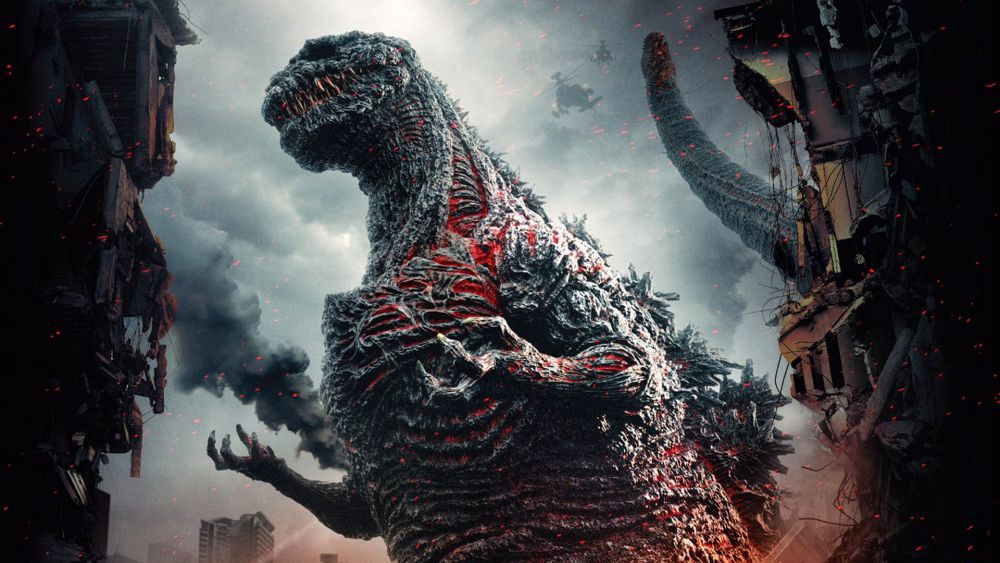 Shin Godzilla is a satisfying monster mash but Godzilla himself looks a bit crap and it’s rather dull in parts. It does at least feel like classic Gojira and hearing the music again was awesome.

Plot: It’s a peaceful day in Japan when a strange fountain of water erupts in the bay, causing panic to spread among government officials. At first, they suspect only volcanic activity, but one young executive dares to wonder if it may be something different – something alive. His worst nightmare comes to life when a massive, gilled monster emerges from the deep and begins tearing through the city, leaving nothing but destruction in its wake. As the government scrambles to save the citizens, a rag-tag team of volunteers cuts through a web of red tape to uncover the monster’s weakness and its mysterious ties to a foreign superpower. But time is not on their side – the greatest catastrophe to ever befall the world is about to evolve right before their very eyes.

Review: I’ve been looking forward to Shin Godzilla (or Godzilla: Resurgence as it’s otherwise known) for quite some time as it’s the return of Toho which will always be the best version of the character/creature.

Gojira belongs in Japan and it’s great to see him back home but is the film worth the wait? Well, to be honest it’s actually what you’d expect it to be with no real surprises but on the other hand it’s exactly what you’d want from a Godzilla film. There are the usual talking heads discussing politics and how to destroy this newly discovered creature but no real characters to care about.

In the American Godzilla from 2014 people complained that there wasn’t enough focus on the creature himself and too much time was spent on boring humans but his movie has similar problems. We do at least get plenty of Mr. Gojira and there is plenty of smashy smashy; most importantly we get the theme music which you’ll remember from the classic movies of old.

But what of the big man himself? Well, sadly Godzilla looks a bit unintentionally funny and when he first appears he has large almost googly eyes which make him just look silly. He isn’t particularly scary and lacks any personality. Obviously he doesn’t need to crack jokes but it would be nicer if the design was a bit scarier and that his eyes actually moved or blinked; I’d say that the 2014 version was better.

At 2 hours long it does drag a little in places and people keep debating about the economic impact of Godzilla when really you just want to watch buildings fall over.

Overall, Shin Godzilla is a satisfying monster mash but Godzilla himself looks a bit crap and it’s a bit dull in parts. It does at least feel like classic Gojira and hearing the music again was awesome. Bring on the inevitable sequel.