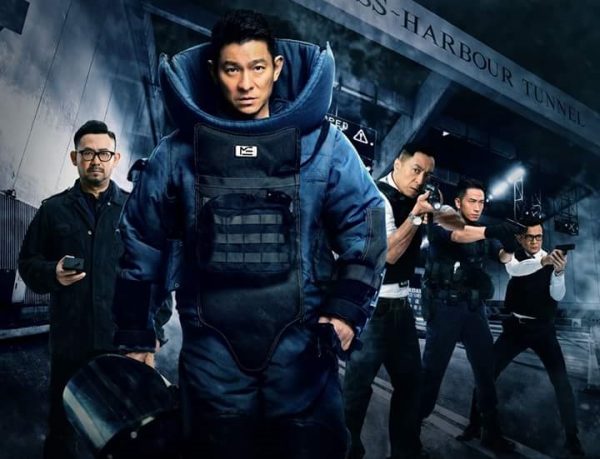 Action-packed with an entertainingly nasty villain, plenty of violence and a great hero in Andy Lau.

Plot: When a terrorist who specializes in explosives takes hold of an underground tunnel, he threatens to kill hostages if his demands are not met.

Review: Another year on and Andy Lau still doesn’t look any older; I`m pretty sure that dude is a vampire or something as he never seems to age. Anyway, Shock Wave is his latest action extravaganza that blew up (sorry) the Chinese box office last month. I was lucky enough to catch it on the big screen today and Lau once again is a winner. Shock Wave is one of the best action movies of the year packed with nail biting bomb disposal scenes and a few awesome explosions thrown in for good measure.

The movie opens with a rather fantastic bank robbery which wasn`t a very subtle nod to The Dark Knight, especially the fact they are all wearing clown masks but it was nicely done with some great action scenes. We find out that one of the robbers is an undercover cop (Andy Lau) and once the ring leader finds out the man he trusted has betrayed his “brothers” he vows revenge. So the story has been set up and I was expecting it to a crossover between The Hurt Locker and Blown Away but it then goes in a different direction when the bomber/ring leader called Blast (Wu Jiang) takes over an underground tunnel with a lot of hostages. So the mind games begin with Cheung (Lau) and Blast trying to outsmart each other.

Wu Jiang`s villain is just a psychotic bastard; you`ll feel no empathy for him whatsoever which is frankly the most interesting kind of antagonist. He enjoys planting the bombs and watching the police run around playing his sick game and by the end of the movie you’ll be throwing things at the screen wanting him to die horribly.

As I said there is plenty of R rated action with a bodycount in the hundreds and some incredibly tense bomb disposal moments.

Andy Lau’s explosives expert Cheung is a hero in every way and a genuinely good man who does his job every day as he sees saving lives as a gift from God. As his relationship blossoms with a teacher he meets in a bar she realises that staying with Cheung could just be another nightmare after a particularly messy divorce. This side story really adds the heart to the tale and the relationship felt believable too where we get to see Cheung’s more tender side.

In terms of flaws there is a bit of an obvious CGI explosion towards the end and I didn’t like the way the story was wrapped up. I wanted it to go a certain way and it didn’t, and it gave us a more nihilistic approach which the story didn’t need.

Overall, Shock Wave is action-packed with an entertainingly nasty villain, plenty of violence and a great hero in Andy Lau. If you can find a theatre with it playing you should check it out as it looked and sounded fantastic.