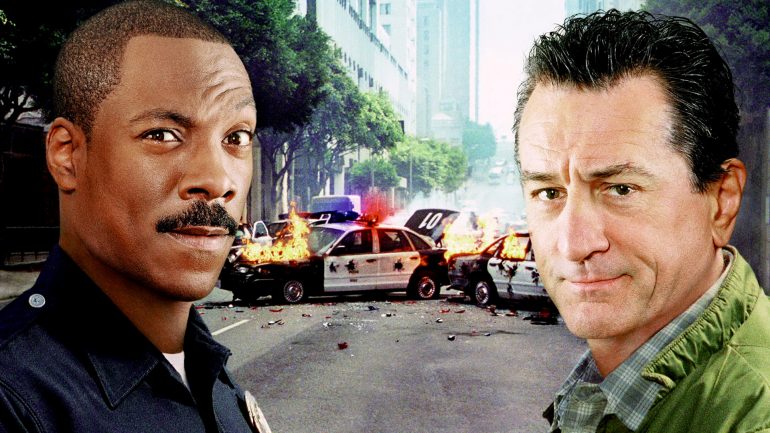 Showtime is a fun concept that isn’t as funny as it could be but it has some impressive action scenes and provides a few laughs making it worth checking out.

Plot: A spoof of buddy cop movies where two very different cops are forced to team up on a new reality-based television cop show, while tracking down the manufacturer and distributor of an illegally made semi-automatic firearm.

Review: This is a movie I had totally forgotten existed; I don’t even remember if I’d seen it before so as I’m going through an action-comedy phase at the moment I thought I would revisit it. Showtime stars Robert De Niro and Eddie Murphy and is a spoof of classic buddy movies like Lethal Weapon, 48 Hrs. et al.

De Niro is perfectly cast as the surly cop Det. Mitch Preston, a 28-year veteran in the police force and during a sting operation reporters show up and in a fit of rage he shoots their camera. The TV studio decide they can use this to their advantage, so they create a new reality show that’s going to follow Preston around. All they need is a partner for him which they find in the shape of Eddie Murphy’s Trey Sellars, a wannabe actor (who is also a cop) and has all the personality needed to make the show a hit.

It’s not as funny as it could be but Showtime is still hugely entertaining with Murphy providing a few laughs but it’s surprisingly De Niro’s stone faced performance that steals the show.

Pedro Damián makes for an effective villain as Ceasar Vargas who is totally one note but once again that’s the point as the antagonists in buddy movies usually are. Spoiler alert – He does get an epic bad guy death which is hilariously over the top but immensely satisfying.

It’s a well-paced 95 minutes and there are some incredibly polished action scenes including shoot-outs and a rather spectacular chase through the city.

I’ve read reviews where they say the movie becomes too much like the movies it’s spoofing but I think that’s the point and it still holds up as (sadly) reality television is still popular.

The supporting cast includes William Shatner as himself who is one of the highlights of the entire film and then we have Rene Russo as Chase Renzi who is the brains behind the Showtime reality series. Robert De Niro’s adopted daughter Drena De Niro also shows up as Annie, Chase’s Production Assistant.

Alan Silvestri provides the score and it is perfect using electric guitars to sound like the buddy movies of old; it also sounds like Predator at times too (which he also scored).

Overall, Showtime could have had a sharper script but it’s not without its moments; the action scenes look great and De Niro is hilariously po-faced making for a fast paced and fun buddy comedy.