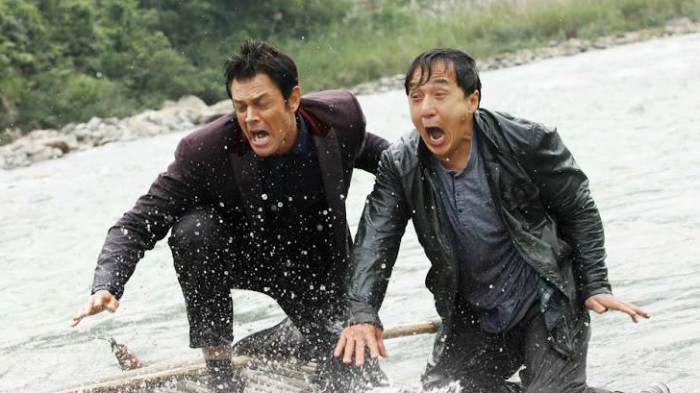 The movie serves as a travelogue through various exotic locations, but never does the film emerge as a true original or a genuine entertainment the way it should.

Synopsis: A detective from Hong Kong teams up with an American gambler to battle against a notorious Chinese criminal.

Review: If a formula works, keep it going … that seems to be a motto Jackie Chan and his team abide by. When Jackie struck paydirt when he paired up with loudmouthed sidekick Chris Tucker in the three Rush Hour movies, he recycled the formula in a period setting with Owen Wilson in the Shanghai flicks, and he’s at it again, only to much lesser effect with a new sidekick Johnny Knoxville, who has sidekicked with some of the best action stars in the business like Dwayne Johnson in Walking Tall and Arnold Schwarzenegger in The Last Stand. He basically does his shtick again with Jackie in Skiptrace, only he’s not a good match for Jackie, who at this point in his long and illustrious career looks bored and exhausted by his globetrotting and elasticity as an action star.

Jackie plays a veteran detective out to avenge the death of his friend and partner, and by unrelated happenstance, a goofball gambler (Knoxville) who owes lots of money to the Russian mob gets mixed up in Jackie’s plot and they end up inseparable as they somehow manage to travel to Mongolia together and get thrown off cliffs and traverse perilous rivers while handcuffed to one another. In other words, these guys are going to start off hating each other, but after saving each other’s hides and learning to respect each other, they’re going to wind up the best of friends.

In concept, Skiptrace is a cinch. They even managed to snag Renny Harlin (Die Hard 2, Cliffhanger, The Long Kiss Goodnight) to direct it, but it has very little identity from a filmmaking standpoint. Harlin serves as merely a director for hire, and it feels more or less like a Chinese production than something that Harlin could put his stamp on. There’s not a single moment in the movie where Harlin’s style (which, admittedly, has been diluted or lost over the years as he’s taken on poor projects) is on display, and even Jackie’s light humor and go-to stunt work and show stopping set pieces are largely absent this time around in lieu of lame back and forth banter with Knoxville. The movie serves as a travelogue through various exotic locations, but never does the film emerge as a true original or a genuine entertainment the way it should.

I caught this in its brief theatrical run, and it was tough to make it through to the end, but now that Lionsgate has picked it up for home video distribution, I expect it will find a wider audience who will be forgiving towards it. Lionsgate’s Blu-ray / Digital HD combo pack includes a running audio commentary by director Harlin (which is worth listening to) and a feature entitled “When Jackie Met Johnny.” Skiptrace will be released on home video on October 25th.