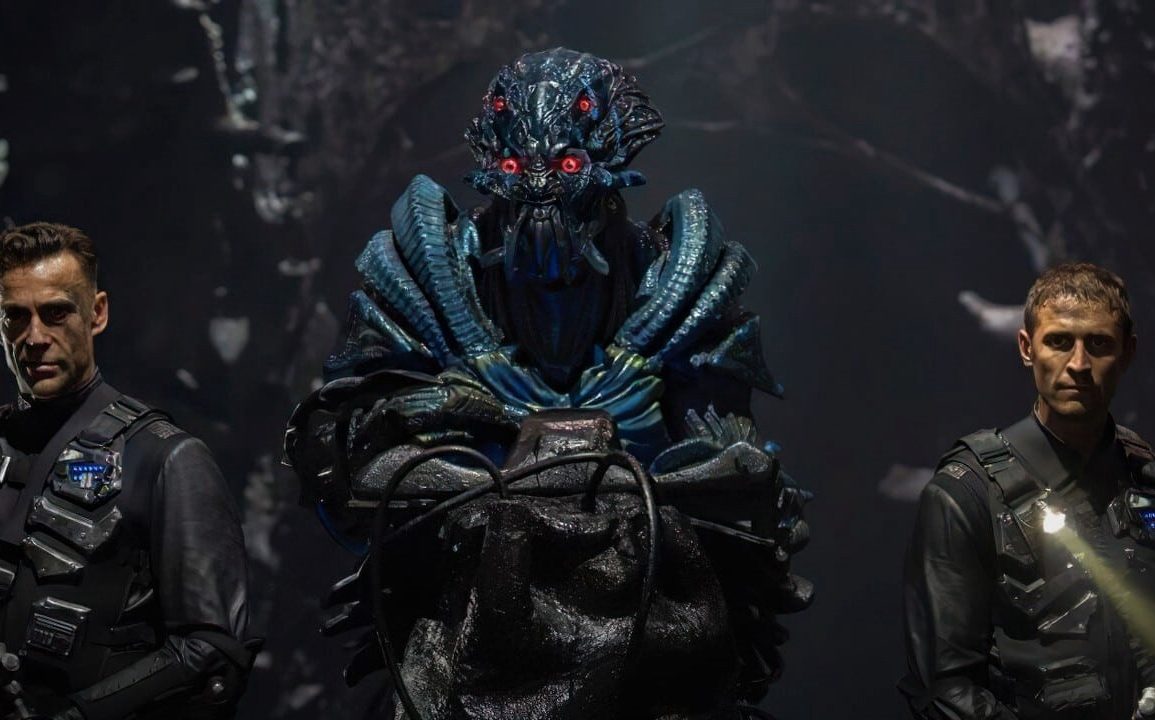 Skylines sets out with one goal – to entertain and that’s exactly what it does. Some of it may be a bit too outlandish for some tastes but it’s still a fun ride with imaginative ideas and Daniel Bernhardt being badass so if you enjoyed Beyond Skyline this is a worthy follow-up.

Plot: When a virus threatens to turn friendly alien hybrids against humans, Capt. Rose Corley and her team of elite soldiers embark on a mission to an extraterrestrial world to save what’s left of mankind.

Review: I think we can all agree that Beyond Skyline was a vast improvement over the 2011 alien invasion picture Skyline. It upped the scale, taking the action international and giving us Frank Grillo and Iko Uwais kicking alien ass. As the plot says above the third entry in the series (but not the last) goes out of this world with Rose (Lindsey Morgan) a human/alien hybrid joining a group of mercenaries on a mission to the alien world in order to save what’s left of humanity.

Skylines feels very much like an homage to Aliens with familiar dialogue like “not bad for a human” although I do wish people would stop saying “we’re not in Kansas anymore” in movies as it is so overdone. Some of the script in general is a little corny but it’s meant to be; this is a B movie franchise and wears that on its sleeve but if you’ve seen the first two then you already have an idea what to expect.

The Skyline films have always enjoyed being outlandish and Skylines is the craziest yet; I’m not sure how I feel about the alien “pilots” with the human personalities as it’s just a bit too silly but as I said this series relishes it and requires you to detach your critical faculties and just enjoy the ride.

Frank Grillo is sadly missing from this movie, but he is in a few flashbacks and his return is hinted at for the potential fourth film. We do instead get Daniel Bernhardt whose career has gone from strength to strength since the release of John Wick. In Skylines he is one of the mercs and he gives us exactly what we want to see from him; a badass character and a few fight scenes.

It’s nice to see Yayan Ruhian return as I was pretty sure he was toast after Beyond Skyline; now if we can just get Iko to come back for part 4 we’ll be all set for an epic finale.

Lindsey Morgan’s Rose is an interesting character as she is consistently conflicted about which side she is on due to her being both alien and human. At times you aren’t sure whether to root for her or not which makes her unpredictable and engaging.

James Cosmo is one of those fantastic character actors who is usually in a supporting role but his mere presence immediately adds gravitas and that is the case here; I wish he had a bit more to do but he never disappoints.

One thing both this movie and Beyond Skyline have is the impressive action scenes considering their modest budgets. Although not always perfect the visual effects look better than a lot of blockbuster fare but there is also still a good use of practical effects and the fight scenes are clear and coherent.

Overall, I still think Beyond Skyline is the best of the franchise as I missed Frank Grillo from this one, but Skylines is still a fun ride with ambitious ideas and plentiful action. Daniel Bernhardt is a welcome addition and the cast all do their best to give us an enjoyable escape from reality.