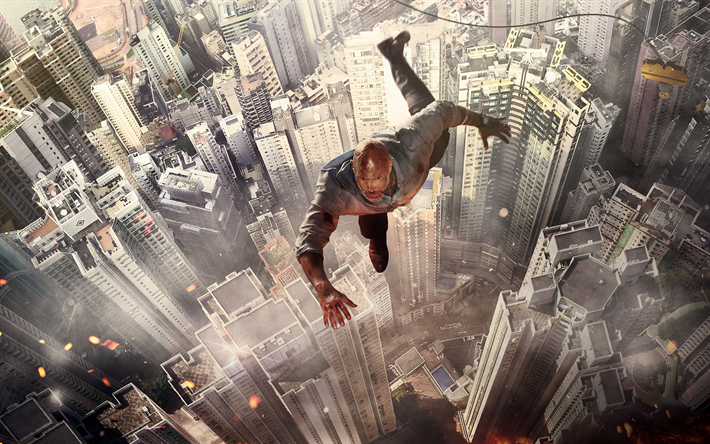 Skyscraper is harmless fun and an entertaining throwback to the era of better action movies but it’s let down by a bland script and villain meaning it will be forgotten about in a matter of weeks.

Plot: Former FBI Hostage Rescue Team leader and U.S. war veteran Will Sawyer now assesses security for skyscrapers. He’s on assignment in China when he finds the tallest, safest building in the world suddenly ablaze, and he’s been framed for it. A wanted man on the run, Will must find those responsible, clear his name and somehow rescue his family, which is trapped inside the building, above the fire line.

Review: It’s nice timing that Skyscraper is getting released today on the 30th anniversary of Die Hard, the movie that inspired it but can it hold a candle to the seminal action classic? Of course not but as a throwback to the actioners of old it’s entertainingly diverting. It’s a Dwayne “The Rock” Johnson movie so you know it isn’t going to be amazing but his sheer charisma carries the picture.

I liked how his character Will Sawyer was an amputee which is something we rarely see in an action movie so this gave it a different dynamic. The fact that he was a complete hero that will do anything for his family proved that even if you have a disability you can still kick ass.

Neve Campbell plays the wife in peril and although starting off as a potential badass they never really do anything with her and she spends a lot of time waiting to be saved. The best addition to the cast was the always cool Byron Mann who has a sizable role in the Al Powell type character as a cop who believes Will isn’t a bad guy.

I saw Skyscraper in 3D which as you all know I am not a big fan of but it’s definitely the way to see the film as it really adds to the vertigo during the high altitude action scenes. It’s well paced and never boring keeping the action tight and despite mostly using CG the visuals are pretty impressive even if you don’t get a genuine sense of peril.

Where the film really falls down is the script; if this is meant to be a nod to Die Hard they probably should have watched it first to realize what great dialogue and characters it had. To this day we all know who Hans Gruber is and he still stands out as one of the greatest villains of all time. Kores Botha (Roland Møller) was forgotten about by the time we walked out of the theatre and made little impact as the main villain.

Die Hard had so many quotable one-liners and John McClane was such a memorable character but Skyscraper (like most action movies today) has little that you will remember or quote at a later date. They really should have read my Action Movie Essentials list from the other day to understand what’s required for an awesome action flick. Despite silliness in later entries of the Die Hard series John McClane was initially a normal guy forced into extraordinary circumstances to save his wife; the action was believable and there was a genuine sense of threat as he bled, cried and could have died at any time. In Skyscraper Will Ford (despite having a false leg) seems to be superhuman and there are several moments where you can only push suspension of disbelief so far.

It’s surprisingly violent for a PG-13 rated flick… and yet it could have used a bit more brutality as I never understood bloodless fight scenes; it is still quite thrilling at times with a few money shots making it worth watching on the big screen and it’s certainly better than A Good Day to Die Hard.

The most innovative idea was the room with the mirror screens which is foreshadowed early on so that you know a climactic battle will take place there. You also get a good sense of scale when we get to see the gardens during the building tour before all Hell breaks loose. The disaster elements separate it more from Die Hard and are a tip of the hat to The Towering Inferno and personally they were some of my favourite scenes.

Steve Jablonksy’s score is decent but forgettable (like the movie in general) so there are no tunes you’ll be humming afterwards.

Overall, Skyscraper is everything you’re expecting it to be with Dwayne Johnson proving once again he’s a likable hero but he really needs to start working with people who can write action movies properly as the dialogue and villain are totally forgettable. You’ll enjoy it for what it is and there are some impressive action sequences but you’ll never be in awe of anything on-screen and it never comes close to the films its referencing.