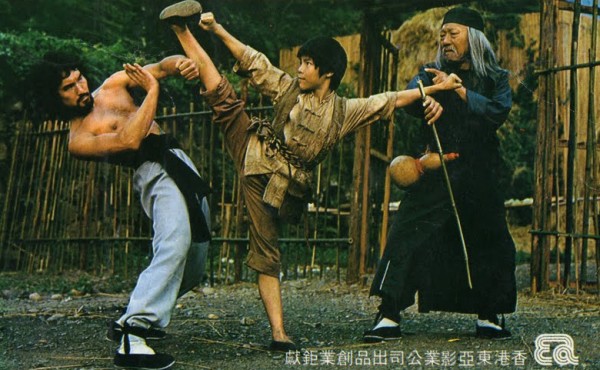 Sleeping Fist is a hugely entertaining kung fu movie, let down by some awful dubbing which causes more unintentional laughter than anything else.

Plot: After being beaten by some thugs, police officer Chin Tai Ba (Leung Kar Yan) learns the Sleeping Fist style from martial arts master Chung Yiu (Yuen Siu Tin). After mastering his training, Chin sets out with his teacher and Cub (Wong Yat Lung) to get his revenge. But the bad guys have a secret weapon of their own, Eagle Claw master Kao (Kao Hsiung).

Although the dubbing is laughably terrible on the movie, you still see how impressive he was as a fighter. He’s an arrogant little punk though and kinda deserves the beatdowns he gets midway through the film. His voice is grating so try to track down the subtitled version rather than the dubbed one. My back hurt just watching some of his moves and he was very impressive to watch.

Leung Kar Yan plays Chin Tai Ba and steals the movie as one of the coolest fighters I’ve ever seen; he has mastered several styles including Sleeping Fist (obviously), Sleeping Monkey and the hilarious Sleeping Fairy. Sleeping Fairy has to be seen to be believed so just watch the film and prepare to be entertained.

Like I said, the dubbing and the acting are not the greatest, but the fight scenes are excellent and are still better than the majority of big budget movies you’ll see today.

The action is pretty much constant with a fight scene every 20 seconds so there isn’t much in the way of story, but we don’t really look for that in a movie like this; we want kung fu ass kicking and Sleeping Fist delivers in spades.

The main villain Kao (Kao Hsiung) doesn’t have much to do until the final fight scene though and is a bit underused.

Speaking of the climactic fight scene, it’s thoroughly satisfying and the martial arts on display are pretty jaw dropping. It’s just a shame you haven’t really developed that much hatred for the bad guy by the end.

Every second word is “Goddamit” or “sonofabtich” so it almost feels like a parody of the genre at times, which provides a few extra laughs.

Overall, Sleeping Fist is a hugely entertaining kung fu movie, let down by some awful dubbing which causes more unintentional laughter than anything else.