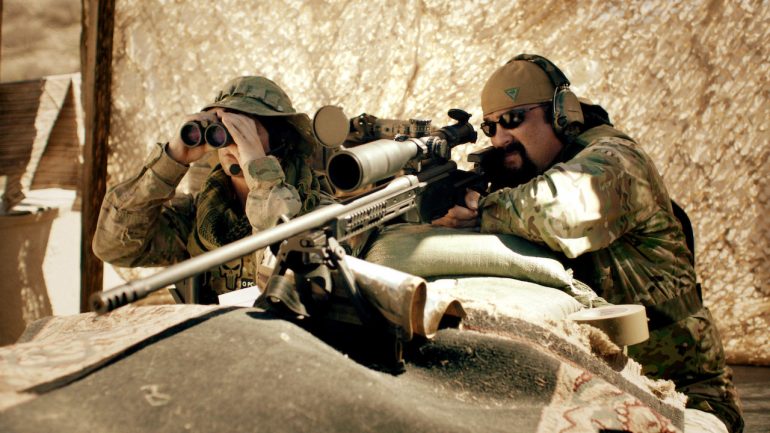 Sniper: Special Ops is not really a Seagal film and will annoy fans more than anything; there are too many things which bugged me about it so I can’t say I would ever sit though it again.

Plot: A Special Ops military force, led by expert sniper Sergeant Jake Chandler (Steven Seagal), is sent to a remote Afghan village to extract an American congressman being held by the Taliban. The rescue mission is a success, but Jake, separated after a firefight with the enemy, stays behind to help an injured soldier. Sergeant Vic Mosby (Tim Abell) desperately tries to convince Major Jackson (Dale Dye) to let him go back and save the soldiers, but is ordered on a mission to retrieve a truckload of munitions which could be vital for the military base. In direct violation of orders, Vic and his Special Ops Team decide to head back to the village to rescue the stranded soldiers. Outnumbered and outgunned, Vic and his men engage in a massive shootout against the enemy, while Jake uses his expert skills to save them all from certain death.

Review: If ever there is a movie with false advertising it’s Sniper: Special Ops; from the cover you see Seagal! Van Dam! oh… it’s not THAT Van Damme. Even then neither actor really has anything to do in this movie; there are a lot of talking and strategy moments and it is also really Tim Abell’s movie. There is pretty much only one scene with Seagal using his sniper rifle. There really wasn’t much in the way of Special Ops either so even if you’re a die hard Seagal fan it’s difficult to recommend this movie.

He literally spends most of the movie sitting in silence and doesn’t even bitchslap anyone once! Not once! When I see a Seagal movie I want him to beat people up. Also how can he see through his sniper rifle with his shades on? He has them on ALL the time! So if you’re looking for things like logic or realism then you’d best look elsewhere.

If I was Tim Abell I’d actually be pissed that the DVD cover and posters for the movie didn’t even have me on it too.

The female reporter Conrad was really annoying and I was really hoping she would get taken out quickly but she sadly made it through to the end.

Speaking of the ending; I found it to be quite frustrating as well. The “bad guys” are willing to peacefully trade with the Americans but because he’s a Taliban leader they decide it’s best to to blow him up. USA! USA!

Never mind that we actually never see him in the rest of the movie; sure, he may not have been a nice guy but it just didn’t feel like the right decision. I wasn’t like “Yes, take that, evil doer!“; it was more “Hmm not sure he deserved that…” which probably isn’t what you’re supposed to feel.

In its favour Tim Abell is decent enough and Paul Logan is in it but he only has a couple of minutes screen time and is sadly wasted.

Overall, Sniper: Special Ops is not really a Seagal film and will annoy fans more than anything; there are too many things which bugged me about it so I can’t say I would ever sit though it again. Go watch Out for Justice again instead…