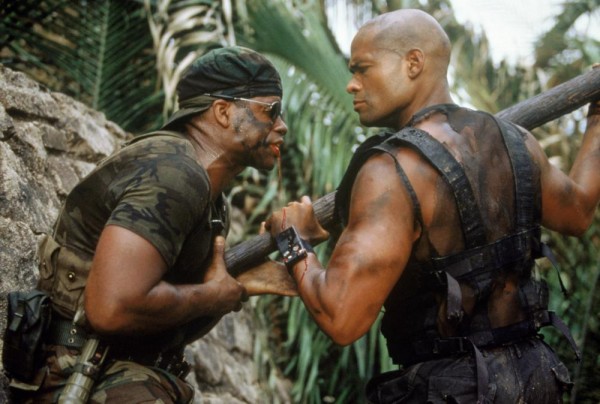 Solo is pure 90’s cheese which rips off several, better films but it’s still a lot of fun with some cool action scenes and a scene stealing villain from William Sadler.

Plot: Android military weapon Solo (Mario Van Peebles) is designed to put down Latin American rebels. But when Solo arrives, the machine feels compassion for the rebels fighting for freedom. Despite Solo’s design, he begins fighting for the people he’s supposed to kill. When his creators, including Gen. Haynes (Barry Corbin), attempt to bring him back, he flees. But the military doesn’t give up. They send an upgraded android into the field to take Solo — and the villagers — down.

Review: I was always a fan of Mario Van Peebles; from Gunmen, New Jack City to Exterminator 2 he was the master of cheesy but awesome actioners. Solo is no different and feels like a cheaper spin-off of Universal Soldier. It even has Christopher Franke doing the score and he did the music to the first Uni Sol.

MVP hasn’t starred in much over recent years that’s really stood out but Solo can safely be filed under ‘guilty pleasure’; any movie which has William Sadler on villain duties is immediately worth watching and he totally owns this one.

There isn’t anything remotely original about the concept; like I said it’s basically Universal Soldier meets Terminator but that’s not a massive problem. Despite looking cheap at times it still has some well done action scenes with real explosions and helicopters. This was before the lazy days of CG blood so even a lower budget movie like this looks pretty decent.

The “peasants” are all stereotypical and not the greatest actors but are basically just there to provide cannon fodder for the bad guys; so by the end credits you won’t even remember any of their names.

That isn’t your eyes playing tricks on you; that is indeed Adrien Brody playing Solo’s creator, proving that Brody has never been someone who is afraid of the action genre. He has done his fair share and has proven himself quite the unconventional action hero. This is more of a computer tech role but it’s still cool to see him in something like this.

Overall, Solo is pure 90’s cheese which rips off several, better films but it’s still a lot of fun with some cool action scenes and a scene stealing villain from William Sadler.