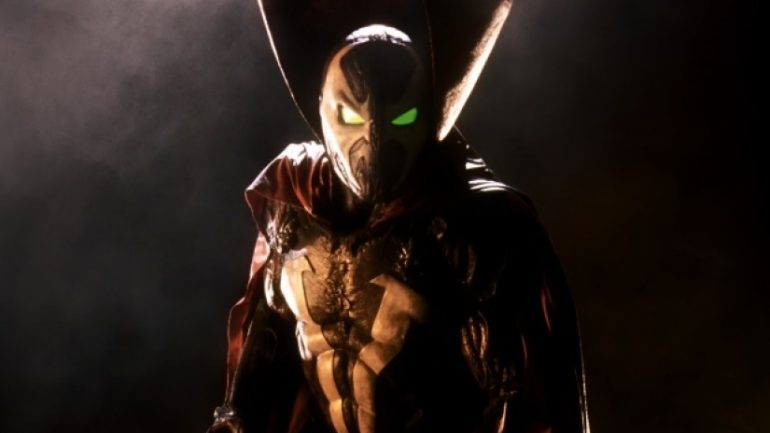 Spawn is silly stuff with rotten visuals but MJW rocks and there are some inventive action scenes too. It’s a fun watch and I would have liked a follow up, perhaps with a larger budget and a more involving story.

Plot: A mercenary is killed, but comes back from Hell as a reluctant soldier of the Devil.

Review: I wasn’t a fan of this movie when I first saw it in the theatres way back in 1997; I was really put off by some of the worst CG in the history of cinema.

Upon giving it another shot recently though, I have to say that it’s actually a fun movie; it made Michael Jai White a known name and the Spawn costume itself looked exceptionally cool.

John Leguizamo is unrecognizable as the despicable villain Clown and has some great lines, although he is mostly just unpleasant.

The make-up in general is impressive with MJW’s burnt flesh looking pretty damn convincing. Speaking of MJW, he was great as Al Simmons; a man who literally makes a deal with the Devil in order to see his wife Wanda again. He’s believable as a hard ass assassin betrayed by his own people; we probably could have had a few more moments with him and Wanda though, to make their relationship matter a bit more.

There is some decent action, but it is mostly let down by the rotten CG; the worst visuals are for Malbuga (The Devil) in Hell. His mouth doesn’t even move when he speaks and even at the time of release it was laughable.

The ideas behind some of the visuals were cool though; the suit being able to shoot out chains, spikes, etc was awesome and the cape would have been wicked if handled correctly.

Although I liked the story of Spawn being asked to lead Hell’s army, there really isn’t much else to it. There is little to no character development and it’s all over so fast that there is little time to care about what happens to Al.

It’s very much left open for a sequel which I would have totally watched with MJW back in the lead and Leguizamo back as Clown. I’d maybe lose Martin Sheen though as wasn’t the greatest in the movie.

Although it lacked any kind of tune, the music score was interesting and atmosphere; it worked well when matched with the gothic visuals.

Overall, Spawn is silly stuff with rotten visuals but MJW rocks and there are some inventive action scenes too. It’s a fun watch and I would have liked a follow up, perhaps with a larger budget and a more involving story. The animated series that came out about the same time was far superior though and is definitely worth tracking down.