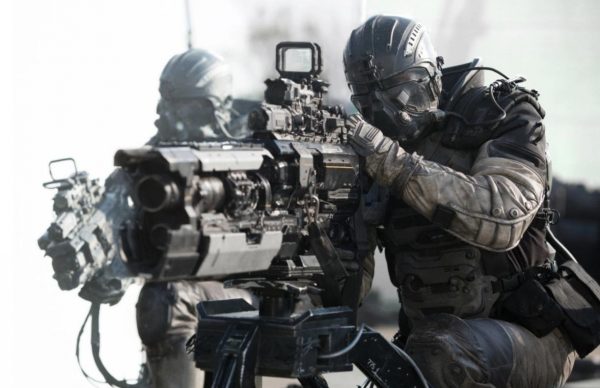 Spectral is one of my favourite movies of the year with some quality action scenes and some genuinely thought provoking science which was certainly a shock. I hope they don’t ruin it with a sequel as it works just fine as a standalone feature.

Plot: A DARPA scientist is tasked with figuring out why a squad of soldiers mysteriously turned up dead in the streets of a war-torn city. The cause appears to be ghosts, and as the body count rises, the military has to figure out how to stop the problem before they spread.

Review: Netflix once again knocks it out of the park with Spectral being frankly one of the most ingenious action movies of the year. It’s a mixture of Aliens, The A-Team and Predator with a near perfect blend of action and horror; it’s not gory or frankly all that violent but the “Spectrals” are creepy as Hell and virtually unstoppable. How do you kill something you can’t see? That’s the question our heroes face when they come across these enemies that are far worse than any insurgents they’ve ever come across before.

For the first half of the movie you’re wondering what these beings are and it never goes for a simple answer but for something more scientific which is all the scarier.

James Badge Dale is our hero Clyne who joins a group of soldiers to find out what these mysterious creatures are and most importantly how they can stop them. Clyne is a likable protagonist who is a great asset to the team despite their initial doubts; where they have all the guns imaginable he has the greatest weapon of all, his mind so it’s up to him and fellow investigator Fran Madison (Emily Mortimer) to find out what the Hell is going on.

Lethal Weapon: The TV Show’s Clayne Crawford supports as a believable military hardass who also has a heart of gold (aww); I have to say that I think the entire cast were excellent. They felt like authentic military types and you actually cared what happened to each of the characters.

The visuals were slick and creepy for the “Spectrals” and definitely reminded me of The Predator in terms of facing an invisible enemy. There is plenty of action with some spectacular weaponry and most importantly real military vehicles; it was great to see genuine tanks rolling on to the screen rather than some computer generated shit.

The music score is Hans Zimmer-esque and suitably bombastic when called for but never overly intrusive.

In terms of me saying it was kind of like the A-team I’m referring to the fact that at several points throughout the movie the soldiers/Clyne manage to create some awesome weapons and even what seems to be some sort of Transformer in a matter of hours which did stretch a little credibility. In terms of other flaws I’d say that there isn’t any memorable dialogue but that’s more the trend with modern action movie scripts.

Overall, Spectral is one of my favourite movies of the year with some quality action scenes and some genuinely thought provoking science which was certainly a shock. I hope they don’t ruin it with a sequel as it works just fine as a standalone feature.