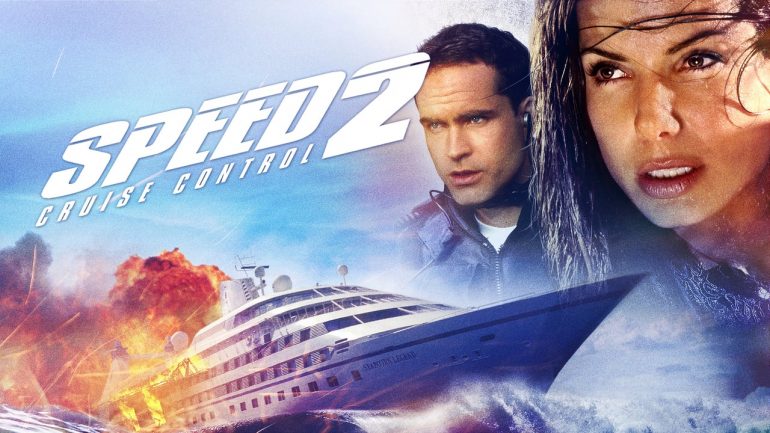 Speed 2: Cruise Control fails to capture lightning in a bottle again as it lacks the thrills and excitement of the original classic. It has its moments and Willem Dafoe as a villain makes any movie tolerable but this is still a chore to get through.

Plot: Annie (Sandra Bullock) is looking forward to a Caribbean cruise with her cop boyfriend, Alex (Jason Patric), who purchased the tickets to make up for lying about working on the SWAT team. Their trip turns dangerous, however, when an explosion disables the ship’s communication system and it becomes clear that the vessel is under someone else’s control. Alex and Annie must fight for survival as they discover that John Geiger (Willem Dafoe), a crazed passenger, is behind the chaos.

Review: The original Speed starring Keanu Reeves, Sandra Bullock and Dennis Hopper is a classic of the action genre with heart pounding action, memorable one-liners and an iconic score from Mark Mancina.

Speed 2: Cruise Control was generally met with lukewarm to negative reviews when it was released so I thought it was time for us to cover it as frankly it’s a disgrace we haven’t already.

I remember seeing this in the cinema with my whole family as we were such fans of Speed; even before we saw Cruise Control our expectations had been tempered due to the noticeable lack of Keanu Reeves. Now he is replaced with Jason Patric who I normally enjoy but his character Alex is so bland and forgettable that he makes little impact. The same can be said for the majority of action too; a Cruise ship doesn’t move that fast so the title Speed makes no sense.

The action looks good and all the visual effects hold up but it strangely never gets especially exciting or tense making it feel like it goes on for far too long; that’s especially the case with the climax when the ship is crashing into the harbour and seems to never stop. I remember people started laughing almost hysterically in the theatre at this point which is never a good sign.

The opening 10 minutes are arguably the highlight of the film with Alex introduced immediately as he heroically appears riding a motorbike jumping into shot in pursuit of a perp. Then we have the return of Annie (Sandra Bullock) who is resitting her driving test and failing with flying colours. It’s meant to be a funny scene but I find Annie a little grating at times and the script is where this film fails the most.

Speed had “Pop quiz, hotshot!” but there are no memorable lines this time around although the scene where everyone says “oh shit” still makes me smile.

There is a little too much humour this time around which also takes away a lot of threat so you rarely feel like anyone is in real danger. “Oh no, the ship is very slowly going that way!”

Willem Dafoe is the terminally ill villain John Geiger who wants to take over the Cruise ship as revenge for being fired. Dafoe is at his cackling best here clearly enjoying himself but I feel that if he had been made a little more sympathetic then he could have been a more interesting antagonist. Instead he  works with what he can but can’t hold a candle to Dennis Hopper’s Howard Payne.

Keanu has since said he should have returned for this movie but I think he dodged a bullet as Speed 2: Cruise Control is inferior in every way.

At least Mark Mancina returns to score once again giving us that great theme as well as some lighthearted Caribbean sounding tunes.

There is a decent supporting cast including Temuera Morrison and Bo Svenson who are believable in their respective roles but even they can’t stop Speed 2 from sinking.

Overall, Speed 2: Cruise Control does have a few entertaining moments and action scenes but it never captures the same excitement of the original movie making for a rather dull and overlong slog.