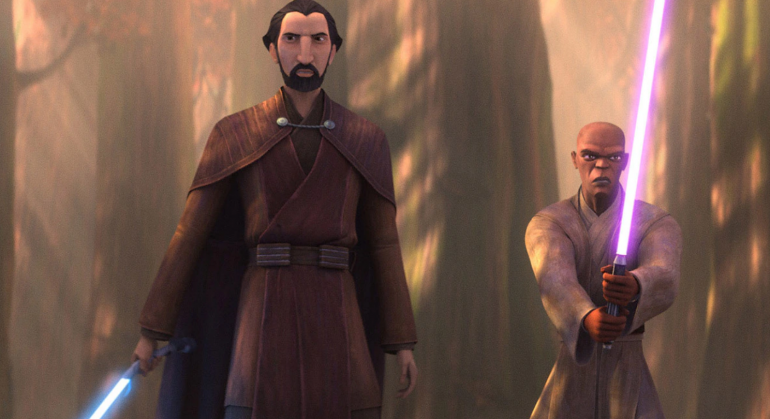 Tales of the Jedi is everything a Clone Wars fan could want filling in some of the backstory to characters and events that were never previously explained but it also has plenty of lightsaber battles and the return of Liam Neeson is also a welcome addition. It’s too bad it’s all over so quickly so here’s hoping we get a few more seasons.

Review:  Watching Star Wars: Tales of the Jedi reminded me of how much I loved The Clone Wars series and makes me want to watch it all over again. Although it’s only 6 short episodes Tales of the Jedi fills in some of the blanks from the prequel era including what motivated Dooku to turn to the Dark Side as well as Ahsoka’s rise through the Jedi Order.

If you’re a prequel fan then this will feel like classic Star Wars as it features lightsaber battles, Liam Neeson returning as Qui-Gon and an epic version of the Force theme during the best episode entitled The Sith Lord. I always wondered what happened to the character of Yaddle who we saw in The Phantom Menace but then she disappeared… well, this answers it and explains why we didn’t see her again.

It’s funny how Ahsoka started out as a rather annoying character when she was first introduced in The Clone Wars but she has since grown to become one of the most beloved in Star Wars. If you’ve read the novel Ahsoka then you’ll love this series and that’s all I’ll say on the matter. It’s hard to discuss anything without spoilers but everything I’ve mentioned is in the trailers so I’ve not ruined any major surprises.

It’s great to hear some familiar Star Wars musical themes again as it’s been a while as Andor has been doing its own thing.

The only complaint I have is that Tales of the Jedi leaves you wanting so much more as the 6 episodes go by so quickly; I hope we get another season or two as revisiting that era feels like returning to old friends. Although the original trilogy are still the best Star Wars films I do love the prequel era as it expanded the universe in so many ways and there are an endless amount of stories that could still be told.

Overall, Tales of the Jedi may be over too quickly but it feels like classic Star Wars and having lightsaber battles, Qui-Gon and Dooku’s younger days and filling in some of the blanks makes it an easy watch so Prequel fans especially will love it. More please.