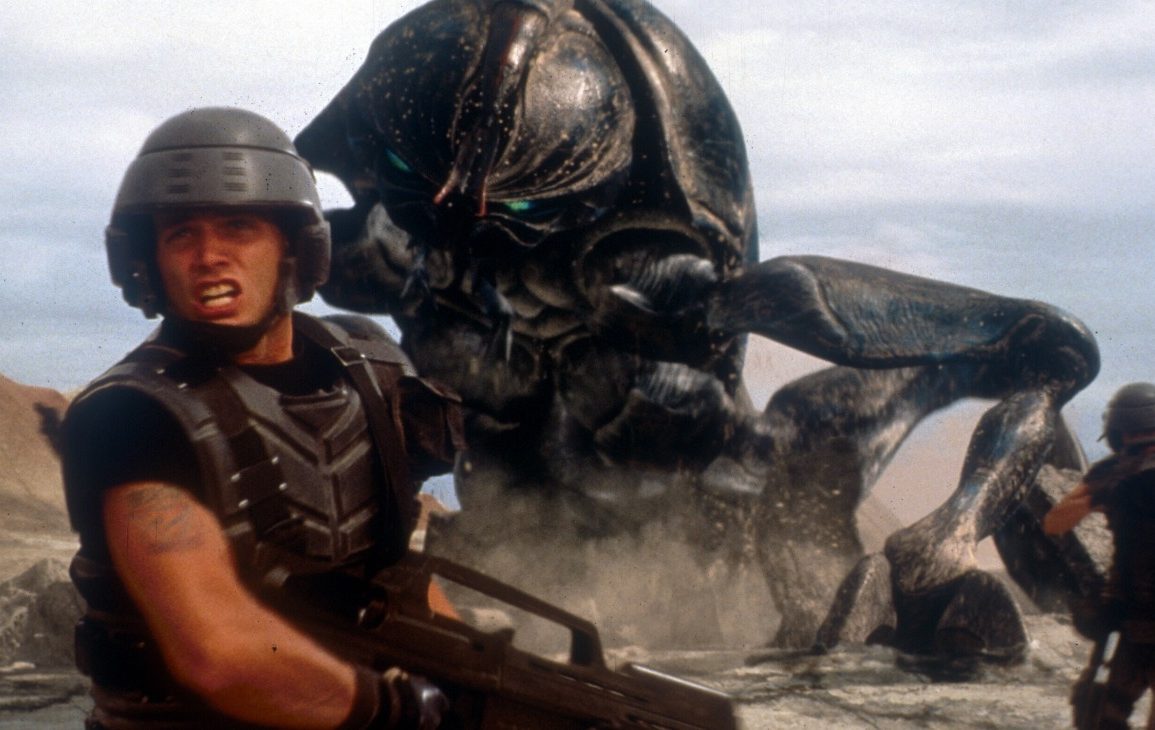 Starship Troopers is well paced, extremely funny and yet brutally violent all at the same time. I can’t recommend this movie high enough, just make sure you’re not eating while watching it.

Plot: “Humans in a fascistic, militaristic future do battle with giant alien bugs in a fight for survival.”

Review: A lot of critics/audience members completely misunderstood this film when it first came out in ’97; they actually thought that it was this pro-fascism propaganda, little realizing that it’s quite the opposite. It’s a satire of militarism, the Cold War and is practically a comedy.

Ed Neumeier’s (Robocop) script is razor sharp and you may notice a familiar theme in this to his other masterpiece Robocop. The Roughnecks shout “Do you wanna live forever?” which of course Emil also says in Robocop exploring themes of immortality.

The characters are all square jawed, war movie cliches and that is exactly the point. They are meant to look like a fascist army in the future. I especially love how Neil Patrick Harris is dressed like a Nazi with the long leather coat, etc. But enough about the satire, what about the film itself?

Casper Van Dien is great as Johnny Rico, the ultimate war movie cliche and he’s a really likable character. My favourite character though is Dizzy played by the stunning Dina Myer, I would have chosen her over Carmen (Denise Richards) any day. I always hated how Dizzy doesn’t survive and that Rico ends up with Carmen, despite Dizzy being the more likable character who is much better suited to Rico and his lifestyle.

The action is absolutely awesome; well, it’s directed by Paul Verhoeven who is one of the all time great directors so it’s not a surprise. There is one of the largest body-counts of all time with hilariously over the top gore.

Basil Poledouris provides one of his best scores, which once again has a satirical tone to it, mocking militaristic propaganda.

Starship Troopers received a massive cult following in the years after its initial release and even had several sequels and spin offs.

Flaws? Some of the CGI is a bit ropey, but it is CGI after all and in general it’s pretty good. I also wouldn’t suggest getting the Blu Ray after all the problems I had getting it to run. I still can’t watch it on my Sony player and had to watch it on my dad’s system. There is some graininess to the Blu Ray picture as well, making it even more pointless.

Overall, Starship Troopers is well paced, extremely funny and yet brutally violent all at the same time. I can’t recommend this movie high enough, just make sure you’re not eating while watching it.