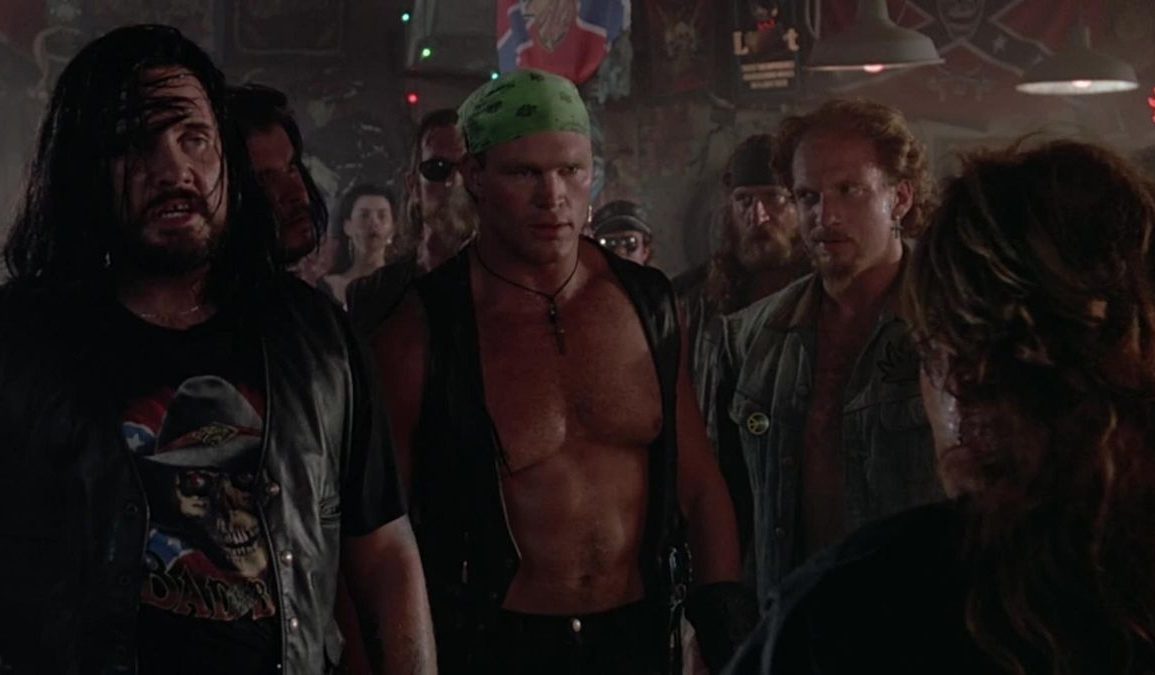 Stone Cold is a bit of an action classic as far as I’m concerned with scene stealing performances from Lance Henriksen and William Forsythe but it’s a shame the Blu-ray is vanilla with zero special features. It’s been nicely remastered though so it’s worth having just for the movie.

Plot: Joe Huff is a tough, go-it-alone cop with a flair for infiltrating dangerous biker gangs. The FBI blackmail Joe into an undercover operation to convict some extremely violent bikers, who are angry at the capture of their leader.

Review: I could have sworn either myself or david j. moore had reviewed this Blu-ray on the site a while back, but I guess it was another casualty of the great 2017 crash.

I think Stone Cold may just well be a perfect action movie as it literally delivers everything you could possibly want from the genre: practical stunts, punch ups, shoot outs, explosions, bikers, chases, strip clubs and nudity.

Opening with a supermarket robbery similar to Cobra this introduces us to our badass cop Joe Huff (Brian Bosworth) as he foils the criminal’s plan and saves the day; because he plays by his own rules he ends up getting suspended from the force so the FBI come along and recruit him to go undercover with a biker gang known as The Brotherhood.

The gang are led by the awesomely named Chains (Lance Henriksen) with William Forsythe playing his lieutenant Ice; both actors chew the scenery and are clearly having a ball riding motorbikes and generally kicking ass.

William Forsythe is great value in any action movie especially when he’s playing a bad guy; who can forget him as the unhinged and terrifying Ritchie from Out for Justice? He cranks the crazy up to 11 this time around and is immediately suspicious of the potential new member of the gang known as Stone. He’s right to be as it’s really Joe Huff who has come to kick ass and chew bubblegum… and he’s all outta bubblegum.

Lance Henriksen shines as Chains who spends most of the movie cackling manically and murdering people in cold blood. At first you think that he and Stone are going to become buddies with a Point Break/Fast & Furious arc but it doesn’t go that way as Chains is just too damn crazy all leading up to an explosive showdown.

Brain Bosworth sports an epic mullet and really looks the part; his big football player frame makes him an intimidating size so he’s believable in the fight scenes.

Sylvester Levay provides the amazing guitar-fuelled score which is so damn manly it will give your chest hair a beard. I wish it had been given an official release but sadly it never happened.

This is one of the fastest paced 90 minutes you’ll ever watch rarely stopping for breath; when there isn’t a brawl happening then it’s filled with tension as you’re constantly worrying if Stone’s true identity will be revealed.

Charlie Sheen did practically the same movie in 1993 called Beyond the Law but personally I prefer Stone Cold all the way.

Olive Films released a Blu-ray of Stone Cold back in 2015 and the picture and sound are well remastered but it has absolutely no special features whatsoever – no subtitles, no behind the scenes and not even a trailer. It’s very half-assed as this is a movie I would love to see supplements on.

Overall, Stone Cold is one of my favourite action movies as it delivers everything you could want with Lance Henriksen and William Forsythe stealing every scene. Brian Bosworth makes for a convincing badass but it’s just a shame this Blu-ray comes with no special features. Thankfully, the film is good enough that it’s worth buying just for that.