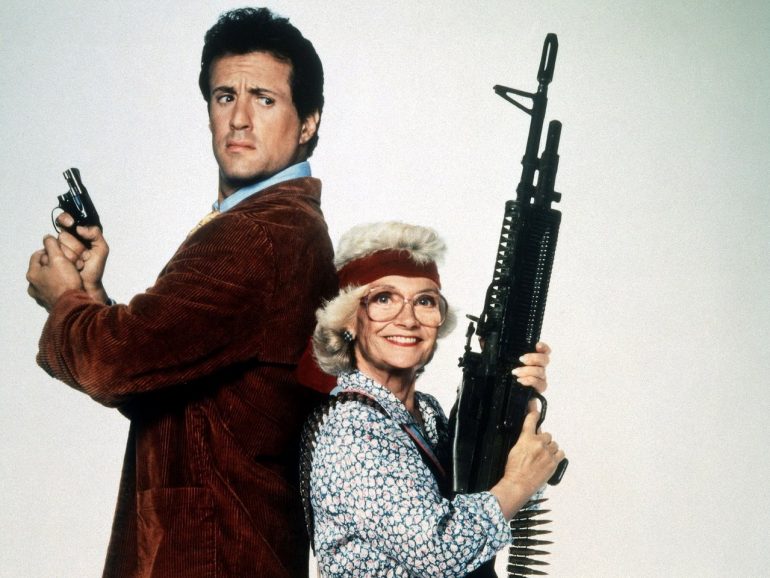 I know I have terrible taste but I don’t care; I had fun with this movie, in fact I feel a “Sue Me!” coming about this soon.

Plot: A tough detective’s mother comes to visit him and begins to meddle in his life and career.

Review: I have to admit that I never watched this until recently; from the trailers, reviews and frankly everyone’s word of mouth (including Stallone himself) it is widely reviled by everyone… except me.

As usual I can find something to enjoy in every film and although I can understand why this movie is hated I actually found it kinda fun and dare I say it… cute.

I liked the relationship between Joey and his mother; it actually felt real and I was expecting to find her really annoying in it. She was just a mom who loved her son and wanted the best for him.

I mean the script isn’t very good and it is really lame, but I dunno it just caught me in the right mood; it’s a feelgood comedy and in these days of humourless action films it just struck a chord with me.

I like Stallone in comedy, he’s just always so likable on screen and has an easygoing charm; despite the lacklustre script in places his charisma redeems it.

Estelle Getty wasn’t the Jar Jar I was expecting and although she was interfering I didn’t find her that bad. As Russell Crowe says in 3:10 to Yuma: “Even bad men love their mommas.”

This is by no means a “good” film but I have to say that I’ve seen plenty worse. I found myself smiling more than I thought I would and I often wonder if it was hated because it wasn’t the kind of action movie that the public wanted Stallone to do.

It’s also rather one note which is essentially all the same joke: “Oh look, it’s funny because his mother is interfering ahaha” etc.

Overall, I know I have terrible taste but I don’t care; I had fun with this movie, in fact I feel a “Sue Me!” coming about this soon.