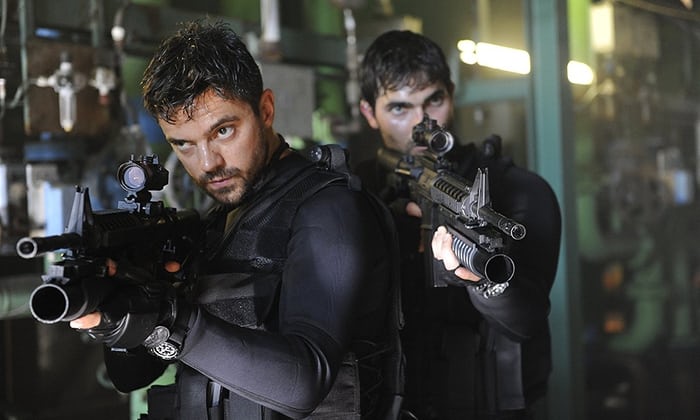 Stratton has some slick action and a few thrilling moments but you’ll struggle to remember it after 15 minutes.

Plot: After the death of his American counterpart, an MI6 agent and his team must race against time to stop a madman from unleashing stolen chemical weapons.

Review: Stratton has been in limbo for ages and I remember when it was initially announced it was meant to star Henry Cavill who dropped out 5 days before filming started. It’s a shame he left the project as I think he would have been great in the role although while viewing I was picturing Jason Statham or Scott Adkins who could play this kind of role in their sleep.

I’ll admit I had pretty low expectations for the movie due to the delays in a North American release (it was out in the UK last year) but the fact it was helmed by Con Air/Expendables 2 director Simon West gave me hope that it would at least have some quality action scenes. In that sense Stratton didn’t disappoint; there is an impressive speedboat chase towards the end and it has a nice sheen to it, looking far better than the majority of straight to DVD releases we see. It never looks cheap and it has an impressive supporting cast that includes Tom Felton and Connie Nielsen.

I wasn’t entirely convinced by Dominic Cooper who I am normally a big fan of and consider a talented actor but I had trouble believing him as a Special Boat Service soldier. It didn’t help that you could tell it wasn’t him doing any of the fighting so hand to hand combat was sadly kept to a minimum. There’s also not much to the story and although I liked the shorter running time it felt like a lot was missing. It was also very predictable and generic with the most obvious mole reveal of all time where you’re like “of course it was him!”

The music was cool but a little over dramatic at times where it felt out of place and like it was from another movie.

Thomas Kretschmann plays our lead villain Grigory Barovsky who sadly doesn’t have much to do and he barely has any scenes with Stratton leaving him underdeveloped and rather forgettable.

There are a few funny lines of dialogue and it’s very well paced; the climax is rather tense and well executed but it’s nothing we haven’t seen before.

Overall, Stratton has some slick action and a few thrilling moments but you’ll struggle to remember it after 15 minutes.