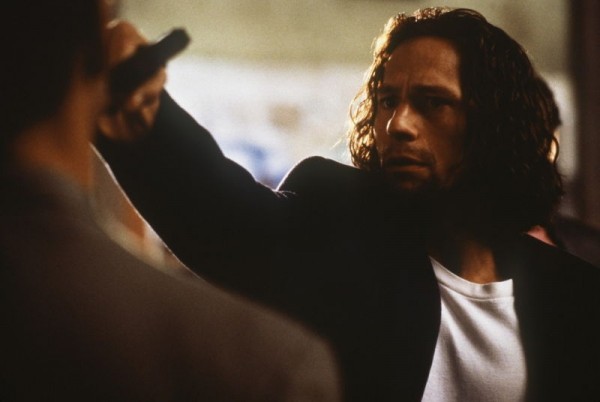 Street Law has an intriguing story with plenty of fights and a swift pace; if you can track it down, it’s an interesting movie to at least rent.

Plot: A martial arts-trained lawyer called John Ryan (Jeff Wincott) is forced to fight in illicit matches after he is framed for a crime, is dismissed from his firm, and all his assets are tied up, including his clothing and furniture after he is evicted from his apartment.

Review: I finally managed to track down this Jeff Wincott movie and although not one of his best, it’s still pretty entertaining.

It moves along at a frenetic pace but it’s actually so fast moving that I kinda lost what was going on in parts.

It does have plenty of fight scenes in it though and Jeff Wincott is totally ripped in it. The choreography is fluid although you can see the odd punch/kick not connecting with the opponent; not a massive deal though as the fights are suitably brutal.

I particularly liked how the fighters actually get tired; in so many martial arts films, people fight for ages and not get tired but anyone who has been in a fight in real life knows that you can get exhausted pretty damn quick.

One of the reasons I’m such a huge fan of Jeff Wincott’s 90’s movies is that they have interesting characters and the stories are a little different from the average action movie.

In Street Law, he’s a lawyer who gets into debt and takes up fighting for his childhood friend in order to pay back said debt… or something. Basically what it says in the synopsis above. He’s not entirely a good guy and that makes him more interesting, especially as the situation gets more desperate and he begins to lose everything.

Paco Christian Prieto did a decent enough job as Luis Calderone, Ryan’s childhood friend, now turned worst enemy. Filled with bitterness about what happened to him when he was younger; he will push Ryan to the very limits to find retribution.

The score is overly loud and a bit distracting in places but I liked the “jungle” sound of it.

Overall, Street Law has an intriguing story with plenty of fights and a swift pace; if you can track it down, it’s an interesting movie to at least rent.