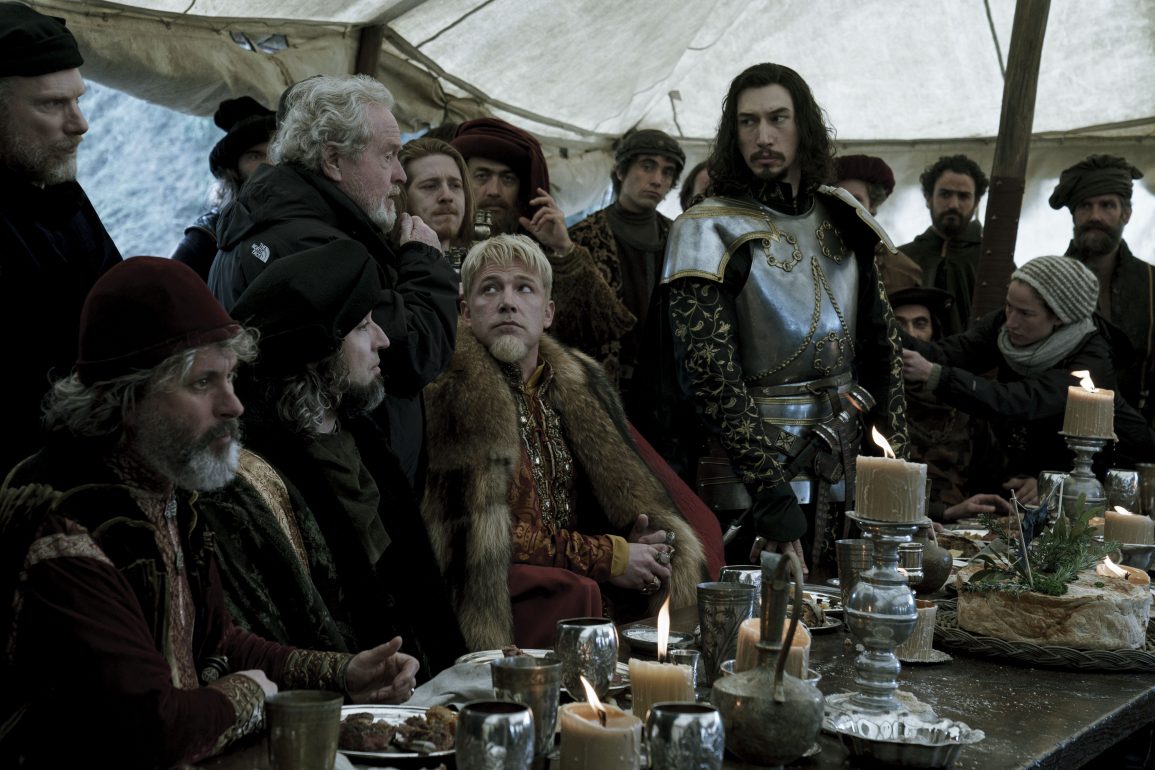 Rob Inch has worked on countless movies over the years as the stunt coordinator including the likes of Black Widow, Wonder Woman 1984, The Star Wars Sequels and several Sir Ridley Scott movies to name just a few. His latest movie is Ridley’s medieval action drama The Last Duel with Matt Damon and Adam Driver and Rob stopped by to chat about working on the movie and with Sir Ridley on various projects over the years.

Today, we are going to be talking about your latest picture The Last Duel directed by Sir Ridley Scott. What kind of brief did Sir Ridley give you whenever you’re creating battle scenes or stunts for this movie?

(laughs) Ridley normally gives me carte blanche to just have at it. I’ve done I don’t know how many films with him now but ultimately, normally when I meet Ridley, there’s a few notes on the written page on the script and there’ll be something like “they have the fight of all fights” and I’ll go to him and say, “What does that mean, boss?” and he goes “I don’t know, you tell me and have at it”. I think The Last Duel was different because ultimately, it’s a true story so my first meeting with him is to kind of get a brief of how tied to that he wants to live and then go away and start choreographing the fight. Normally there’s three or four revisits back to him to show him what we’ve done with stunt visualization. Normally we don’t actually shoot it in an action format, but I did it with this one, and I think it was one of the first weeks we were shooting in France, and I took it to him and he went “That’s the duel. Don’t touch it. Just show it to Matt Damon and tell me what he says”. Then the following day we met Matt and basically he said exactly the same things “that is it, we’re not touching it. We’re going to shoot that”. That was the first edit we did in rehearsals. So that never happens, but we knew that we’d sort of struck on something pretty good at that time.

As The Last Duel is based on a true story did you have to do a lot of research into making sure things are historically accurate in terms of the fighting moves?

Yeah, I have a fight coordinator and I have a team with me that have been with me for years and we’ve done lots of medieval stuff. Jousting is my background and I did theme park jousting, but something like this, we try to live in the factual part of it. So, we make sure that it definitely has some factual parts to it but then we try to think outside of that and make it something that obviously is a bit more cinematic and dramatic as well.

How challenging is it to make sure the battle scenes look fresh and different?

It’s always challenging, I think that’s the thing that keeps us thriving in this industry and maybe dealing with the amount of time we have to shoot one. I was just saying, in another interview before this one, ultimately the battles that you see on the screen other than the joust, the battle where Matt Damon thinks he saves Adam and then the other version is where Adam Driver thinks he’s saved him. We shot that in two days and all of the other battles like the battle flashback and the Scottish battle were both shot in single days. So, it’s down to me to look at schedule and go “You know what? What can we do that looks cool and also authentic in this amount of time?” That’s how I get guided as well.

When putting an action scene together, do you like to make sure it’s telling a story in itself?

Yes! Yeah. I mean, that’s really important to me, and I think it treats them (especially one on one fights) a bit like a conversation; it has to have music and we are all monitoring and saying the same thing over and over and over again. When we’re doing dialogue, it’s boring so that’s the thing with action or fights; one on one for sure has to feel like to me kind of orchestrated. All of a sudden you start off quietly and then it builds in the middle, and then you would then come back down. You have a moment where you relax to get to tell the story in the drama way. Then the tempo picks up again so there needs to be peaks and troughs in action but definitely more so in a one-on-one fight.

Is there any scene in the film where people maybe wouldn’t think a stunt coordinator is required?

Yeah, probably there was a couple of moments in the movie, obviously, where girls and ladies are being thrown around on the bed. I was called upon to make sure that they were thrown upon the bed in a safe manner but that’s what I’m there for.

You’ve worked with Adam Driver on Star Wars and The Last Duel. How is he in terms of doing his own stunts? He comes from a military background, so I figured he’d be quite fearless in that respect.

He hates to have a stunt double and I understand why, because ultimately nobody moves like Adam. Like I said before, I think realistically, probably 95% of what you see on the screen, apart from the horse stuff, 95% of that foot flight, if not more, is all Adam Driver and Matt Damon doing their own stuff. That’s down to them being very involved in the rehearsal process and wanting to portray their own story in it. So, when they’re that involved in it sometimes I’m actually having to ask them to do less, not more, which is strange. But yeah, amazing. I mean, he does have the right to be a stuntman if he wasn’t an actor.

Can you talk us through the actual creation of the duel from inception to completion?

Yeah, I mean, there’s a visual aid of storyboards, but most of it is all done by pre-viz and figuring out what can and can’t be done. The joust part of it was interesting because of the way the horses were falling and things like that. But we actually did the mechanical elements in there that were then helped with the visual effects. The actual fighting part of it is all concepted to begin with and then we stunt viz it which is like a moving story board.

Do you enjoy working with visual effects or do you prefer to do things practically?

I think if we learn to work together, then actually what they do is they enhance our job. I like to do everything practical, but sometimes what I’m doing is practical I say to them if there is a feasible way of me putting a crash mat on the ground, and I can do this physically if you can remove the crash mat. They have no parts of what I’m actually doing within the shot. They just help me with the safety element to it. So, I think if you use them that way, it’s a tool. But I don’t like to live in the digital world, but I do like to use them to help me out.

Recently, a lot of stunt performers have been making their way into directing, like Sam Hargrave, Chad Stahelski or David Leitch; do you have any plans to direct yourself in the future?

Yes, I do actually. I’m directing the second unit on a Marvel show at the moment called Secret Invasion, but if the right script came in and the right opportunities came in I would absolutely jump at the chance. I’ve been fortunate enough to work with the legend that is Sir Ridley Scott and if you haven’t learned much about directing movies after how many I’ve done with him, then there’s no hope for you at all (laughs).

What is it like to work with Sir Ridley Scott after so long? You must have a good relationship.

He is the best, to be fair. I’m in awe of him every day I go to work. Sometimes we kind of lock horns a little bit and I’ll say, “it needs to be like this boss” and he’ll be like, “No, it doesn’t need to be that, we could do this”. Then I look at it through his eyes and I’m like “yeah, he’s absolutely right”. He’s a genius, an absolute genius and without a doubt, one of the best directors I’ve ever worked with or ever likely to, and I’m full of admiration for him.

Thank you so much for taking time to chat with me today and all the best with your future projects as well.

Pleasure, thank you very much.