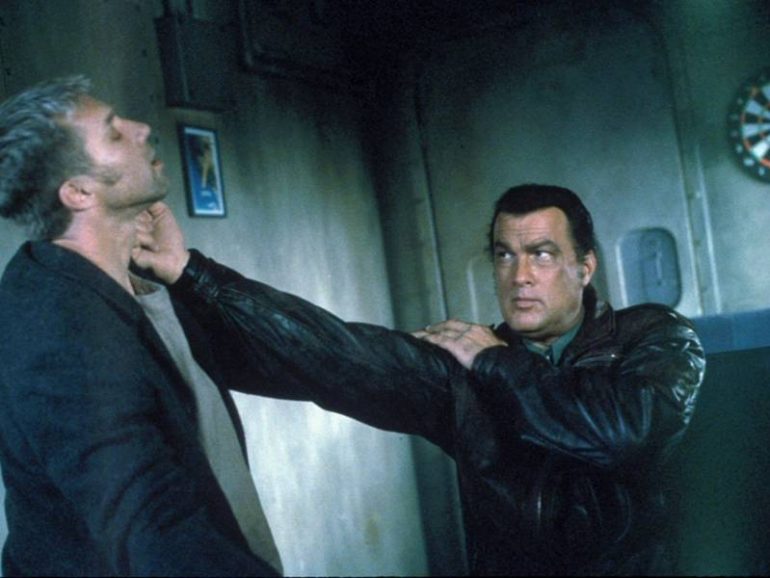 Submerged is a missed opportunity as it had potential with that cast but was sadly squandered into a forgettable and frankly incoherent mess.

Plot: Soldier for hire Chris Cody (Steven Seagal) is paroled and tapped by the government to root out a terrorist organization. With help from military analyst Susan Chappell (Christine Adams), Cody and his crew head to Uruguay to take out their foes. But, as the mission progresses, Cody comes to learn his target isn’t a foreign terrorist but an American intelligence operative with designs on creating his own private army. Good thing Cody has a submarine and lots of guns at his disposal.

Review: I don’t know why I keep doing this to myself when I know these films aren’t going to be any good but I want to try and review every Seagal film no matter how terrible some may be. The frustrating thing is Submerged had promise as it had a cast that included Seagal, Gary Daniels, Vinnie Jones and William Hope (Aliens).

I was at least hoping for a beatdown between Seagal and Daniels but sadly it was a 3 second fight that was apparently going to be a bigger battle but due to Seagal stepping in at the last minute he changed it so the fight would always be to his advantage.

There were apparently lots of behind the scenes issues between Seagal and director Anthony Hickox which explains why the movie feels incomplete; I mean Seagal barely says 3 lines of dialogue for the entire duration and is dubbed over by someone who doesn’t sound anything like him.

The story was pretty nonsensical too and just didn’t keep my attention at all; some bollocks about mind control and assassinations but really who cares? All we want to see are some relatively decent fight scenes and we don’t even get that. To have Gary Daniels relegated to such a small, pointless role was also a travesty, and I can’t help but think what might have been.

There are some annoying editing tricks as well to try and make scenes seem more exciting but it was really more distracting than anything. Also, why is it called Submerged when about 15 minutes of the entire movie are set on the submarine?

It just felt unfinished and one moment that particularly stood out was near the opening when Gary Daniels and his crew are in a “helicopter” but are speaking at normal volume.

I’ve been on a helicopter before and you pretty much have to shout so people can hear you or at least wear an earpiece/earphones to be heard properly. It may not be a big deal but it just felt glaringly obvious, especially with the crappy greenscreen too.

On the plus side there is a pretty decent shoot-out in a tunnel and you do get to see Vinnie Jones as a good guy which is rare.

Overall, Submerged is a missed opportunity as it had potential with that cast but was sadly squandered into a forgettable and frankly incoherent mess.