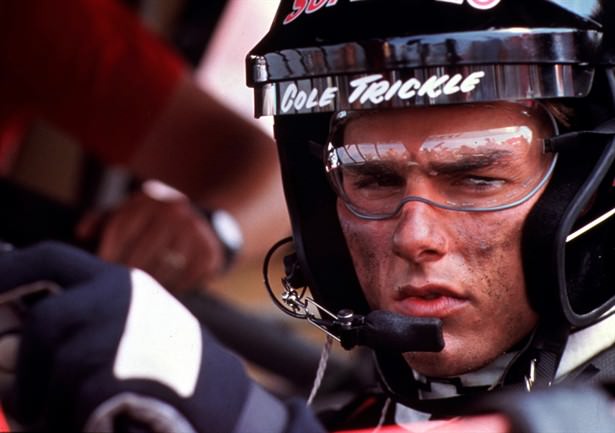 Plot: In the fast-paced world of NASCAR, a rivalry brews between rookie hotshot Cole Trickle (Tom Cruise) and veteran racer Rowdy Burns (Michael Rooker). When both of them are seriously injured in competition, the former bitter rivals become close friends. With Cole’s spirits restored by a romance with neurosurgeon Dr. Claire Lewicki (Nicole Kidman), and Rowdy still sidelined by injuries, Cole decides to race Rowdy’s car in the Daytona 500 against underhanded newcomer Russ Wheeler (Cary Elwes).

I always thought Days of Thunder was unfairly treated when it was first released with people referring to it as a poor man’s Top Gun when there is actually plenty to enjoy.

Yesterday it turned 28 years old and got me thinking that no matter the reviews or low Rotten Tomatoes rating I’ll always enjoy the movie. Yes, it is similar in style to Top Gun but it has some cracking racing scenes with NASCAR drivers turning left in spectacular fashion. Cruise as always does a lot of his own stunts which is why he remains one of the most authentic action heroes in the business.

Most importantly Tom’s character is called Cole Trickle which is one of the best character names of all time and we really need a return to silly action hero names again. This was also his first movie with Nicole Kidman and they had genuine chemistry on the screen. Kidman uses her real accent which is rare and was very appealing as his doctor turned love interest. Although Cole is stubborn as Hell you do still root for him mostly due to Cruise’s charisma.

Michael Rooker stars as Rowdy, a rival turned ally to Cole which remains one of my favourite roles of his as Rooker just embodies the character perfectly; you also have Robert Duvall doing his mentor role to Cole as Harry Hogge. He could literally not say a word for the entire movie and still be magnetic to watch. Hilariously we’ve also got John C. Reilly as Buck Bretherton who would later mock this movie with Talladega Nights – “Shake and Bake!”

A young Hans Zimmer provides the music score which is (as you can imagine) awesome to drive to and still had his trademark sound; I listen to it regularly in my never ending Hans Playlist on my iPod.

Sure, the plot is predictable and mostly goes in the direction you expect but I enjoy every moment mostly due to the cast.

Keep your eyes open for a cameo from the late Don Simpson as one of the drivers; he produced the movie with Jerry Bruckheimer. Remember when you saw their logo before a movie trailer? You knew it was going to be for something awesome with bug budget action. I miss those days.

So Sue Me! After 28 years I still like Days of Thunder, and if you don’t then I’ll see your ass in court.