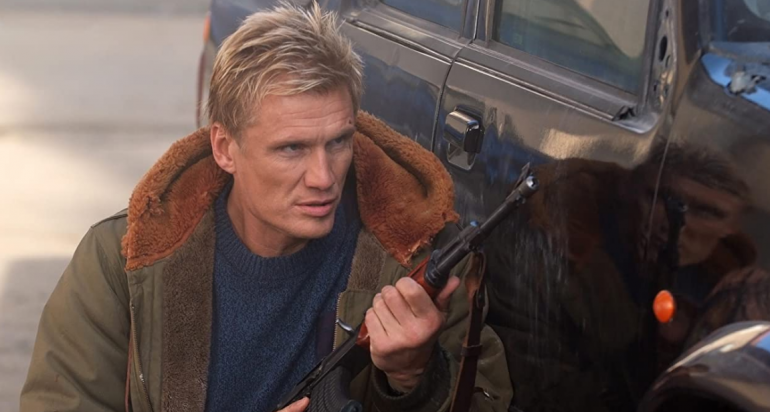 Plot: An American prisoner in a Russian jail is given a chance at freedom if he can rescue a kidnapped American woman.

I was saying in The Action Elite Facebook group the other day how we haven’t covered enough Dolph Lundgren films lately so you can expect a few in the coming weeks.

First up is the action-packed Direct Contact which may have a generic name (and has no relation to Direct Action) but there are explosions every few minutes, fight scenes, shoot-outs, and some awesome squibs.

I like how Dolph’s character Mike Riggins is far from invincible getting beat up a few times in the first half hour but he makes up for it by killing anyone in his path for the rest of the movie.

Michael Paré is the villain Clive Connelly who has manipulated Mike into rescuing a kidnapped girl called Ana Gale (Gina May) who is the daughter of a billionaire, but all is not as it seems and Connelly has his own reasons for wanting Gale.

I’m a simple man with simple tastes; I like explosions, fights and over the top deaths and Direct Contact delivers on that front. I was reading on IMDb however that despite the amount of coverage and action filmed, stock footage was used from several films of the studio Nu Image / Millennium Films’ library. This never bothered me as it wasn’t especially glaring; I only thought the driving scenes looked unconvincing, but I still had a ball with it.

Dolph looks the part as always and you believe him in every fight scene due to his sheer size and martial arts skills.

*Spoiler alert* Michael Paré has an awesome bad guy death too (which is a little reminiscent of Hard Target) where he gets a grenade dumped down his shirt then Dolph kicks him out the window and he explodes amazingly with his guts going everywhere. Remember I’m single, ladies!

One of the bad guys is called Drago (in a not very subtle callback to Rocky IV) and is a truly hateful bastard as he takes pleasure in shooting anyone.

The film may not have a massive budget and occasionally some of the acting isn’t the greatest but really if you’re watching movies like this then you’re here for the bodycount and Direct Contact delivers in that respect.

If like me you enjoy watching things (and people) explode then you’ll have fun with this movie so Sue Me! I like Direct Contact and if you don’t then I’ll see your ass in court.