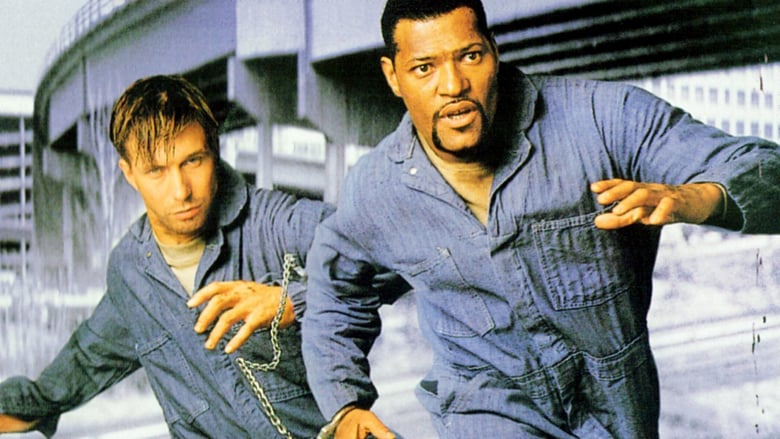 Plot: During a routine prison work detail, convict Piper (Laurence Fishburne) is chained to Dodge (Stephen Baldwin), a cyberhacker, when gunfire breaks out. Apparently, the attack is related to stolen money that the Mafia is after, and some computer files that somebody wants desperately to bury. The pair, who don’t exactly enjoy each other’s company, escape and must work together if they are to reach Atlanta alive. Luckily, they meet a woman (Salma Hayek) who may be willing to help them.

Fled is a film I had totally forgotten existed until it popped up on my Amazon Prime the other day; I hadn’t watched it since the 90’s when it first came out and I forgot what a total blast it is.

It’s on Rotten Tomatoes at 18% and I don’t know anyone who actually likes it but that’s the fun part of these blogs is standing up for much hated movies. Fled doesn’t pretend to be anything other than a fun, escapist action flick and in that respect it delivers the goods.

It’s 98 minutes of pure action with fistfights, double gunplay and horrendous 90’s fashion. Seriously could no one find clothes that fit? I remember I had a pair of those massive pants back in the day and as useful as they were for parachuting out of planes or housing herds of sheep they never looked cool.

Anyway, this is a buddy caper with Fishburne and Baldwin punching each other every few seconds while hurling insults and I do miss these kinds of movies.

Fishburne’s character is called Piper which tees up the best worst finishing line in movie history – “Time to pay the Piper!” (see below)

I miss killer one-liners in movies and over the top bad guy deaths all of which need to make a comeback in the future.

I love Salma Hayek in this movie who seems to be the calmest hostage in history never seeming remotely threatened when these two convicts kidnap her. Apparently her ex-husband was a cop so she is used to all of this shit, I guess…

Will Patton also never seems to lose his cool as one of the most chilled cops you’ll ever see but he’s good at his job and is one of the few who believe there is more going on than what we see on the surface.

There are a few funny lines but there are some really lame ones too especially when Baldwin asks Fishburne if he’s seen “What’s Love Got to Do with It”. There are some twists in the story but nothing too deep; we never go more than a few minutes without an action scene keeping things well paced.

Fled is utterly preposterous and has some of the most obvious use of doubles I’ve ever seen in an action movie and yet despite the flaws I can’t help but enjoy it so Sue Me! I like Fled and if you don’t then I guess I’ll see your ass in court.