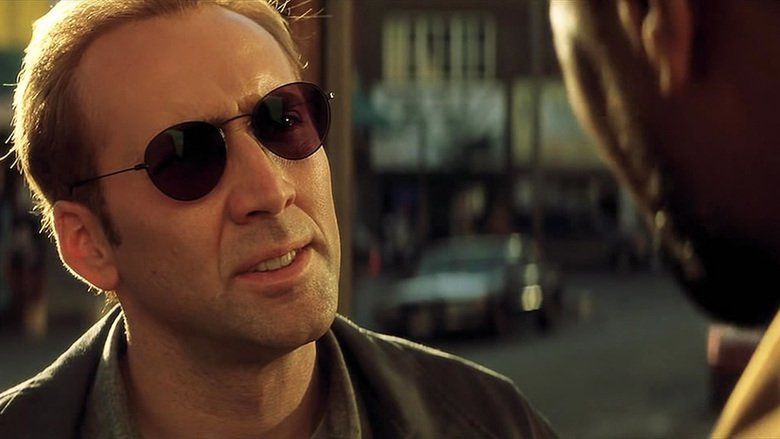 I’ve read on various sites that this is considered one of the worst movies of all time… really? You need to watch more films if you think that.

Gone in 60 Seconds is pure Nicolas Cage greatness. The movie tells the story of a car thief who is forced to steal 50 luxury vehicles in one night in order to save the life of his brother, who has fallen foul of a dangerous crime lord. Once the most successful car thief in California, he must reassemble his old gang to fulfil the almost impossible mission. His task is further hampered by a rival band of thieves and, of course, the local police.

First of all Cage’s character is called Memphis Raines which is an awesome action hero name but the movie also has a stellar supporting cast who also have amazing names like Otto Halliwell (Robert Duvall), Tumbler (Scott Caan), The Sphinx (Vinnie Jones), Sway Wayland (Angelina Jolie) and Kip Raines (Giovanni Ribisi). Then you have Will Patton as Atley Jackson, Delroy Lindo as Detective Roland Castlebeck and Timothy Olyphant as Detective Drycoff. The villain is played by Christopher Eccleston who gets built up as this really scary dude (compared with Satan no less) and yet he is never particularly threatening. He even stated himself that this as a “terrible film in which I give a terrible performance,” adding that, before Doctor Who, people who recognized him mostly shouted, “‘You were in ‘Gone in Sixty Seconds,’ mate! You were shit!’ And I have to laugh at that, because I was!”

It’s all very glossy looking with everyone being cool and some awesome cars including the Shelby Mustang known as Eleanor (also my mommy’s name, trivia fans). According to IMDb Seven Eleanor replicas were made for use in this movie. Five of them were totaled during stunt sequences. Nicolas Cage and Jerry Bruckheimer kept the remaining two. Cage regularly takes his out for joy rides, while Bruckheimer is afraid of driving his.

The best thing about this movie however, is the music; Trevor Rabin’s score is a shot of adrenaline and I still listen to it while driving (fast) on a regular basis.

This is one of the few movies where I find Angelina Jolie attractive as frankly I normally think she is utterly terrifying but I like her with the blonde hair.

Whatever happened to director Dominic Sena? Last I heard of him was Season of the Witch which also starred Nicolas Cage. It’s a shame he hasn’t done much since as he also directed Kalifornia and Swordfish (another Sue Me! article I did a few months back).

There is some CG which lets down some key action scenes but nothing major; Nic Cage has several Cagey moments but I think the below scene pretty much sums it up.

It’s all ridiculous stuff but it knows exactly what kind of movie it is and is pure popcorn fodder so Sue Me! I love Gone in 60 Seconds and if you don’t then I guess I’ll see your ass in court.