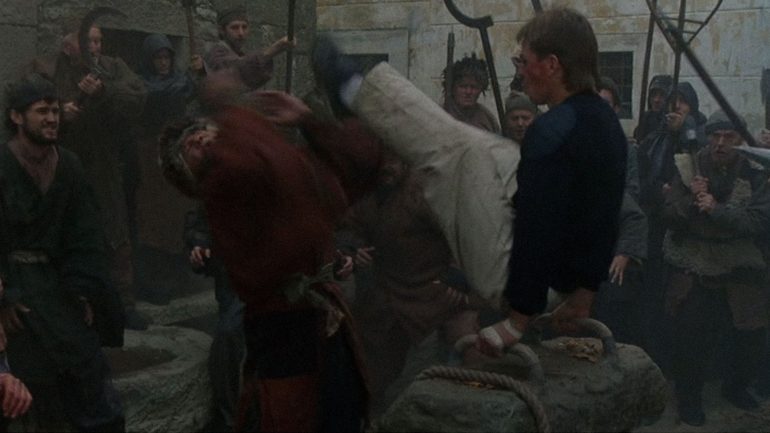 Gymkata is one of the most 80’s films you’ll ever see; it mostly makes no sense and is widely regarded as one of the worst films of all time… it probably is which is why I love it so much.

How can you hate a movie that has a protagonist who has a mullet, knows gymnastics and is some kind of secret agent that travels to a foreign country to compete in a deadly game not won by anyone other than a native in more than 900 years? Pass the popcorn!

Our lead Jonathan Cabot is played by real life gymnast Kurt Thomas who would go on to star in two other movies. Not a great movie career but he certainly had the moves making for some entertaining fight scenes involving ninjas and an entire town full of crazy people.

It literally feels like 2 movies with the last half hour taking place pretty much entirely in slow motion as Cabot fights his way through the town while also escaping a pack of wild dogs. It’s like they just discovered how to do slow motion and fell in love with it thinking “you know what? Let’s just leave it on…” and they do. The film is probably about 45 minutes long but thanks to the miracle of slo mo it’s now 89 minutes.

Richard Norton stars as the villainous Zamir and he is a nasty piece of work who just enjoys killing the game’s competitors. I challenge you to watch this entire movie without staring at his chest.

Gymkata is sort of like The Most Dangerous Game, Hard Target and Surviving the Game… but not as good but it still has ninjas in it which makes for essential viewing. I used to think my job sucked until I saw that some ninjas stand for an entire day holding flags. Suddenly my life doesn’t seem so bad.

There is no shortage of ninja punching action and Gymkata surely has a huge bodycount with some satisfying kills.

It’s hard to believe this was directed by Robert Clouse who also helmed Enter the Dragon and Battlecreek Brawl but if you think back when trailers first came out for this movie we all thought it looked awesome and something different. It was certainly that and I’m still surprised it wasn’t a Cannon movie as it has that vibe to it.

Gymkata is an absolute riot for all the wrong reasons but it’s a movie I’ll never get tired of watching while very, very drunk. If they ever do a remake let’s have Scott Adkins as Cabot with Gary Daniels as Zamir.

So Sue Me! I love Gymkata and if you don’t then… well, you probably have good taste in movies.