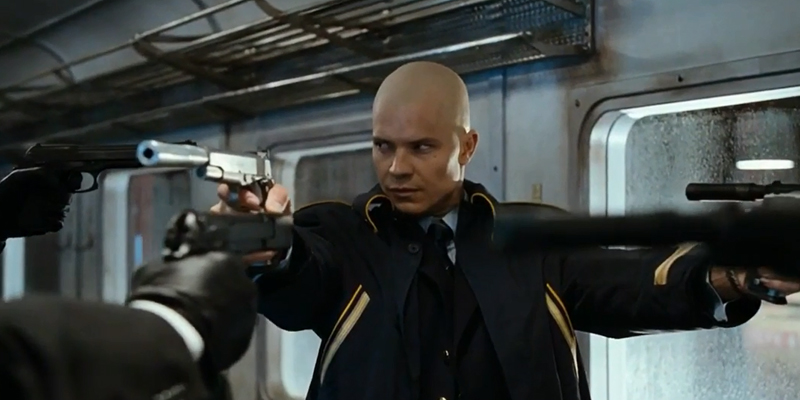 I know Timothy Olyphant isn’t who we had in mind to play Agent 47 but aside from that, I find Hitman a lot of fun with plenty of R Rated violence and Olga Kurylenko flavoured nudity for all the family.

The story was as follows: A gun-for-hire known only as Agent 47 hired by a group known only as ‘The Organization’ is ensnared in a political conspiracy, which finds him pursued by both Interpol and the Russian military as he treks across Russia and Eastern Europe.

Olyphant isn’t bad in the role either; he brings enough ruthless efficiency to make the character believable and I think he did the best with what he had.

There is an awesome sword fight scene with Agent 47 going up against several of his former colleagues and it’s a really nicely executed (ho ho) action scene.

It is shot in some interesting Eastern European locations and the film has an almost Cold War vibe… did I mention that Olga Kurylenko gets naked? Well, she does.

Robert Knepper is a fun bad guy and I always thought he’d have made an interesting Joker if he was a few years younger. He seems to enjoy these kinds of roles and when you’re as good at them as he is then why not keep playing them?

The score by Geoff Zanelli is pretty entertaining and it even has a memorable theme tune but also has a bizarre mixture of “Ave Maria” in it.

As I said in my review a while back, I was never much of a gamer; I’d played the games but didn’t really care how accurate the movie was, I just wanted it to be a good time and for the most part it was.

So there you go, I like Hitman and if you disagree then I guess I’ll see your ass in court.