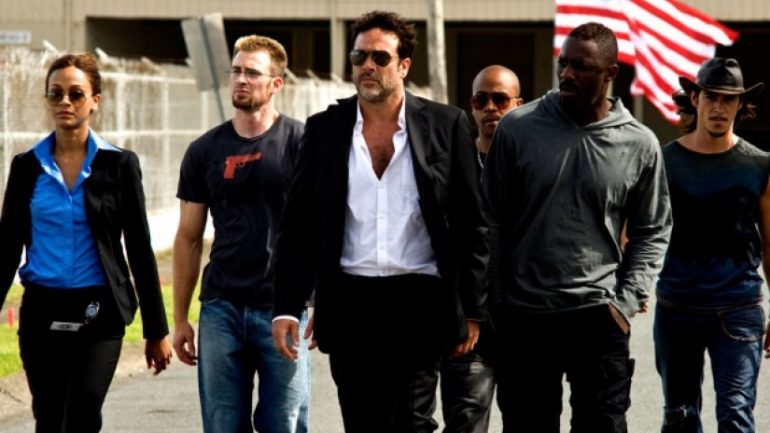 Plot: On a mission deep in the Bolivian jungle, a team of elite commandos (Jeffrey Dean Morgan, Chris Evans) finds itself on the receiving end of a lethal betrayal. Now presumed dead, the men join forces with a mysterious operative named Aisha (Zoe Saldana) to hunt down their enemy and even the score.

2010 was definitely the year for the ensemble actioner with The Expendables, The A-Team and The Losers all getting released. While the Expendables is the movie that is the most remembered with genre fans, The Losers is still a hugely entertaining movie with a far better script.

The cast are all having a ball and there isn’t anyone cooler than Jeffrey Dean Morgan. That’s just science.

Chris Evans has some great lines, Zoe Saldana looks stunning and her character is pretty well-developed too. There is great chemistry between Morgan and Saldana and the fact that she blames him for the death of her father is a nice angle giving it a little depth.

You’ve also got Jason Patric as a hilariously over the top villain, shooting his own men/women for even the slightest misstep. The woman being shot for lowering the umbrella for a few seconds is the most cartoonish moment, but it makes me howl with laughter every time.

It’s meant to be silly fun and for me it totally works; It’s got some fantastic action scenes and the finale, set on the docks is action movie gold.

Let’s not forget that it also has one of the greatest bad guy deaths of all time as a villain is thrown from his motorbike, goes through the window of a plane, while the bike hits the engine, causing a huge explosion and making me cheer like I’m at a football game.

John Ottman’s score is filled with cool guitars and pounding drums, really adding to all the action and even the quieter scenes too.

The only major fault I had with the movie was the frustratingly open-ending; it was clearly leaving itself ready for a sequel which never came. It’s a bit presumptuous and it makes the movie not quite stand well enough on its own.

Aside from that, The Losers is a blast. So Sue Me, I enjoy it and if you don’t like it, then I’ll see your ass in court!