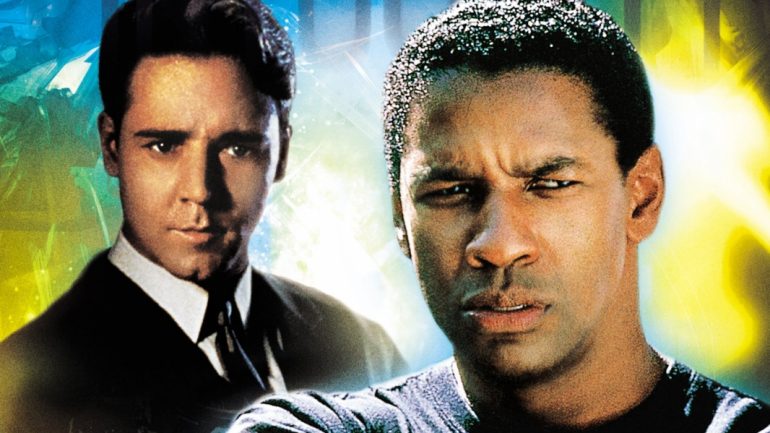 Plot: When a virtual reality simulation created using the personalities of multiple serial killers manages to escape into the real world, an ex-cop is tasked with stopping its reign of terror.

I remember watching Virtuosity when it came out way back in 1995 but it didn’t make much of an impression on me; this was during that brief period when Hollywood thought Virtual Reality was going to be the next big thing with movies like The Lawnmower Man, Expect No Mercy and more.

In Virtuosity Denzel Washington plays a former cop who has been imprisoned for murdering the psychopath who killed his family; Parker Barnes (Denzel Washington) is recruited to test out a new virtual-reality program where the goal is to apprehend a computer-generated being called SID 6.7 (Russell Crowe), who has been modeled on hundreds of deranged criminals. When SID manages to escape into the real world, Barnes must capture or destroy him before the soulless entity can go on a killing spree.

I rewatched Virtuosity the other day on Prime and I’d forgotten what a wild ride the film is; Russell Crowe chews the scenery as SID and is suitably psychotic and it looks like he’s having a ball. Denzel’s character isn’t your typical hero either, having been incarcerated for murder (despite formerly being a cop). When SID is unleashed on the real-world Barnes is brought back on duty to take him down and thus securing his own freedom.

Virtuosity may be a little dated in terms of some of the visual effects but it still has plenty of action with a few fight scenes, shoot-outs and a car chase. It’s well paced and despite being silly the crazed performance from Crowe keeps you glued.

It was only on this viewing that I noticed the little girl Karin who is kidnapped at the end is Kaley Cuoco from The Big Bang Theory. The film has an impressive supporting cast including William Forsythe, Costas Mandylor, Traci Lords and William Fichtner.

There are some interesting ideas including the use of nano tech which is explored more in other movies and I also like some of the Virtual Reality ideas even if few of them ever became a reality.

Initially Paramount wanted Arnold Schwarzenegger to play Barnes but his price tag was a little too high; he would have been awesome but I think Denzel brings more of an emotional range to the character than Arnie would have.

Overall, Virtuosity is far better than I remember; sure, it may have some dated visuals using early CGI but the action still holds up and Russel Crowe is wonderfully unhinged as SID with Denzel also never phoning it in no matter how silly some of it can get so Sue Me! I like Virtuosity and if you don’t then I guess I’ll see your ass in court.