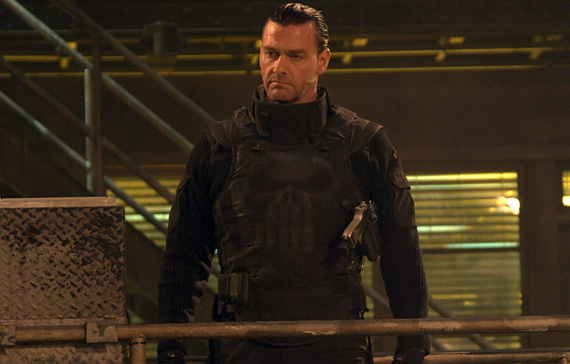 I know we haven’t had a perfect Punisher movie yet but personally I’ve found something to enjoy in all three.

Punisher: War Zone starring Ray Stevenson gets a lot of hate but I’ve always loved it. Sure the villains are annoyingly over the top and a bit cartoonish but the film genuinely feels like an old-school 80’s action movie. It has a huge bodycount (largest of all 3 films), ridiculously over the top deaths and a total badass one man army in Frank Castle/Punisher.

The scene where Frank has his nose damaged and uses a pencil to fix it makes me squirm every time as I’ve had my nose broken a few times and understand how sore it is.

It’s a nice touch and feels very real, making Frank seem more human. Although he is a one man army in this movie, he is still vulnerable and not an invincible superhero.

Stevenson really looks the part as well with a great tough guy face where he looks like he’s been through absolute Hell.

There are certain moments where I just wanted to cheer; the guy free running over the buildings is a particular favourite. Frank picks up a bazooka and blows his ass up in mid-air. Is it over the top? You betcha and that’s what an action movie should be!

The death at the end for Jigsaw is hilariously brutal too with him getting stabbed with a pole and then thrown on a fire, where he is left to cook until he is Well Done. No sequel for you!

It also has a kick ass metal soundtrack including War Zone by Rob Zombie  which is awesome.

Heads explode, intestines are ripped out and necks are broken like it’s going out of style… so yeah, to me this is THE perfect date movie… which is why I’ll probably die alone. Oh well, I regret nothing.

So sue me, I love Punisher: War Zone and if you don’t like it then I guess I’ll see your ass in court.