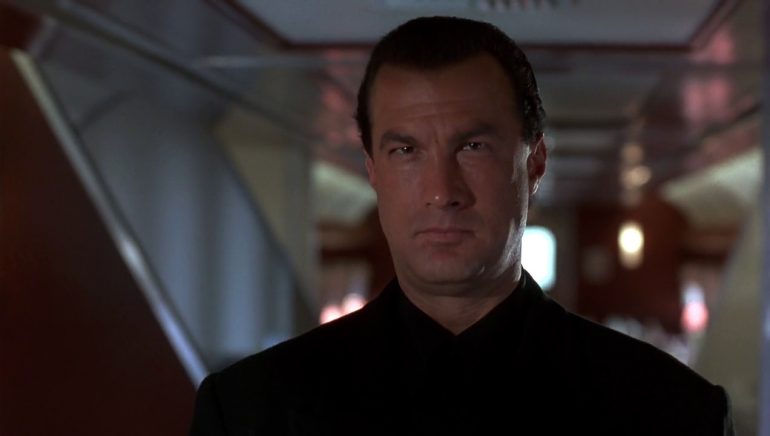 Sue Me! I Love Under Siege 2

Under Siege 2: Dark Territory saw the return of iconic hero (and chef) Casey Ryback and was during the “Silver Era” of Steven Seagal (according to Vern).

Sadly, Seagal has only had a few cinematic releases since then but this movie was one of the best cinematic experiences of my life because it was only me, my brother and two other drunk guys in the theatre… and no one else.

Widely regarded as inferior to the first movie, it is, but I absolutely adore it because it’s so utterly, preposterously, entertaining.

First of all you’ve got the script with such dialogue as follows:

Penn: Casey Ryback is a former SEAL Team captain. And a *counter-terrorism expert*.

Travis Dane: I thought *you* were the best there is, Penn.

What I want to know is he’s the best there is at what? Everything? Probably… it’s Steven Seagal so I wouldn’t argue just to avoid getting bitchslapped.

This is classic action movie stuff which John Wick gloriously brought back into fashion recently; the speech about how badass this guy is. To me this is the cornerstone of any nutritious action movie; it’s fine to have a hero with depth and emotion and all that sensitive man shit, but I like my action heroes to rip throats out and then say something cool afterwards… it’s just the right thing to do.

Ryback does this multiple times during the Under Siege movies and has some choice lines himself like “nobody beats me in the kitchen” after heroically breaking someone’s neck.

The bad guys in this movie are amazingly over the top too; Travis Dane is played with relish by Eric Bogosian who just looks utterly batshit every second he’s on-screen. Patrick Kilpatrick (The Sandman from Death Warrant) also has a role as a goon and he’s the man who actually says “he’s the best there is”.

Everett McGill is brilliantly crazy as Penn, a man who gets annoyed after Ryback rips his coat (the bastard). They have an awesome climactic battle (in a kitchen) where Ryback gets to say THE line. McGill hasn’t been in much since and there haven’t been any updates to his IMDB page since 1999, which is a shame as he was always great value as a villain.

Now in the movie Ryback is so awesome that he can even defeat gravity; as the train is exploding and crushing around him, he runs through it and manages to jump out onto a helicopter which is waiting to save him. Phew, that was a close one.

Travis Dane also dies one of the best bad guy deaths ever; he manages to jump on to the ladder of the helicopter as Ryback escapes and grabs on to Ryback’s leg. Casey shakes him loose and climbs into the helicopter; he slams the door shut as Travis catches fire, the door cuts off Travis’s fingers and he plummets to his fire doom into the flaming wreckage of the train. YES!

Casey Ryback actually kills 23 people in this movie alone Kill Count fans, which isn’t bad but as usual I thought the number would be in the triple digits.

Katherine Heigl was even hot in this movie but the only real thing which bugged me was Morris Chestnut who was the unnecessary and cowardly “comic relief.” He would of course work with Seagal again on Half Past Dead which actually wasn’t very good… so let’s move on.

Under Siege 2 is also action-packed with some decent set-pieces and despite the odd crappy bluescreen it’s well paced and one of my personal favourite Die Hard clones.

So yeah, Sue Me! I love Under Siege 2 so if you don’t like it then I’ll see your ass in court… where Ryback will be waiting to make a stew out of your head… after slapping it… a lot.