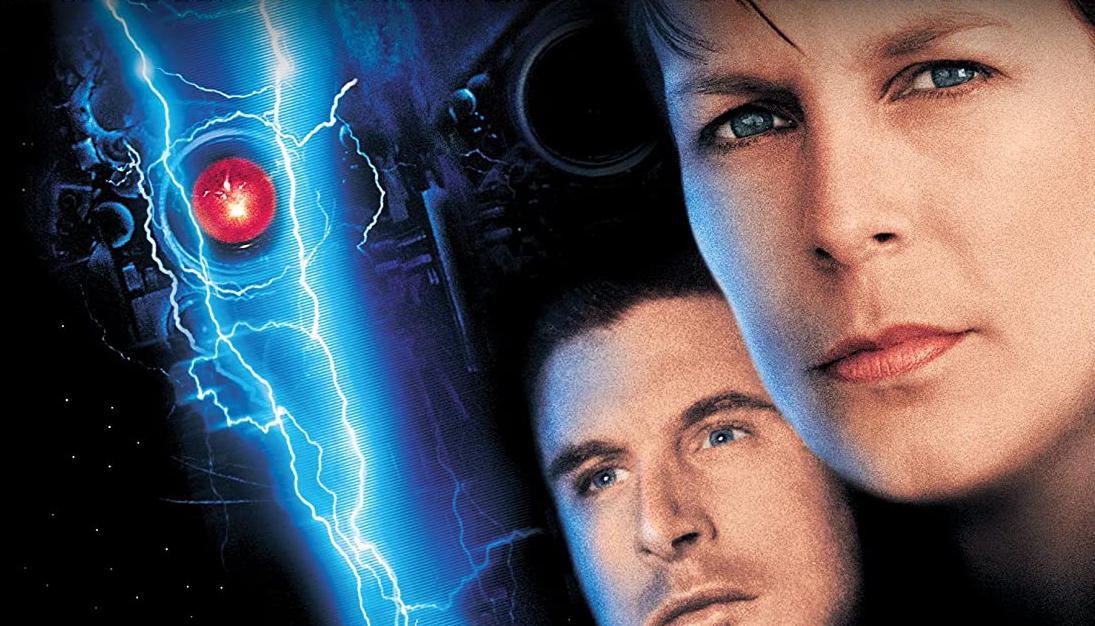 Plot: Caught in a typhoon, a tugboat commanded by Robert Everton (Donald Sutherland) comes across a mysterious near-deserted ship. Excited to find a vessel that could be sold for as much as $30 million, Everton and his crew board and prepare to move the craft, despite the warnings of sole survivor Nadia Vinogradiya (Joanna Pacula). When a malevolent alien presence begins killing off the crew, navigator Kit Foster (Jamie Lee Curtis) tries to convince the rest of them to leave before it’s too late.

Sitting at a hilarious 10% on Rotten Tomatoes Virus was generally dumped on when it first came out and it doesn’t really get talked about anymore. I remember watching it in theatres way back in 1999 and at the time I thought it was a blast; I hadn’t seen it since then but recently picked it up on DVD in a 4 pack with some other gems like They Live. After sitting through Virus last night I still think it’s a lot of fun with some impressive practical effects that hold up today.

Joel McNeely’s score is orchestral and exciting which is the kind of music score we rarely see these days; I miss those huge cues that build up to explosions. You know what I mean; like when Ripley is flying away from the planet at the end of Aliens – that music is trouser dampeningly awesome. The music to Virus is similar and works well in keeping this well paced action-horror flick as exciting and tension filled as possible.

Queen Jamie Lee Curtis can do no wrong in my book and she has always been so good at these types of characters; she’s is smart, strong but also utterly terrified of this alien entity that is determined to destroy mankind who it sees as the virus… it ain’t wrong.

The only weak spot in terms of performances is Donald Sutherland who sort of puts on an Oirish accent at times but then forgets so he’s bit all over the place. Still, he hams it up wonderfully and it all just adds to the (quoting Cameron here) cyberpunk madness of it all.

William Baldwin, Cliff Curtis and the rest of the crew are well cast in their respective roles even if no one has any real characterisation. In a movie like this we don’t really need it; they are all just being set up to meet gruesome fates and Virus doesn’t disappoint. There are a couple of memorably gory kills and the machines are still creepy and well done.

It’s a rapid 94 minutes with lots of shoot-outs with the machines, explosions and a few jumps cares too. I forgot it was based on the graphic novels from Chuck Pfarrer (Hard Target) which I’ve never read but I feel like I would like to track them down.

As you can see from the trailer below there are alternate versions of the film with a few different scenes but I’ve only ever seen the theatrical version.

Overall, Virus may be nonsense but it sure is fun with a great cast, awesome music score, plentiful action and cool killer cyborgs. So Sue Me! I love Virus and if you don’t then I’ll see your robotic ass in court.