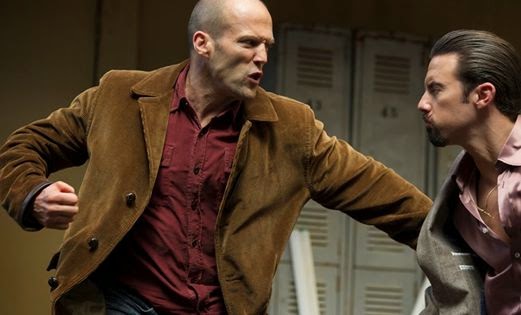 To prepare myself for watching Jason Statham steal the show in Fate of the Furious tonight I recently had another watch of his underrated Wild Card from 2015 which was a reworking of the Burt Reynolds movie Heat.

It tells the tale of Nick Wild (Jason Statham); a Las Vegas bodyguard with lethal professional skills and a personal gambling problem. When a friend is beaten by a sadistic thug, Nick strikes back, only to find out the thug is the son of a powerful mob boss. Suddenly Nick is plunged into the criminal underworld, chased by enforcers and wanted by the mob. Having raised the stakes, Nick has one last play to change his fortunes…and this time, it’s all or nothing.

When I first watched it I wasn’t blown away as it wasn’t quite as action packed as other Stath vehicles but when I viewed it again I have really grown to appreciate it more. The action scenes (although there aren’t many) have Statham at his brutal best as he uses anything as a weapon from ash trays, to spoons to knives, so no villain is safe.

I also really enjoyed his character of Nick Wild who gets himself into quite a mess with local mobsters and it’s a nice angle to see a lead who actually screws up.

I’m a big fan of Milo Ventimiglia who plays a real sleazy piece of shit called Danny DeMarco; he treats women like crap so watching him get his comeuppance at the end is incredibly satisfying.

I still say it’s not one of Statham’s best movies but the sheer brutality on display in the fight scenes are worth watching alone. In fact there’s a video below which has all of the best moments so you don’t have to worry about boring things like story and characters.

That’s a pretty impressive bodycount, am I right? Like I said it’s not an amazing movie but I am growing to love it just for the sheer badassery of the fight scenes and most importantly it’s a new Christmas set action movie to watch around the holidays… because nothing says Christmas like stabbing people to death.

So sue me! I think I love Wild Card and if you don’t, well… I have no problem with that either.