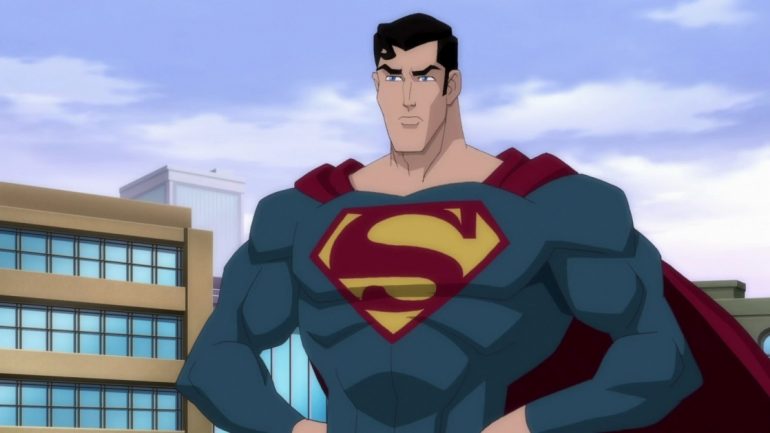 Superman: Unbound has some decent action and is surprisingly pretty violent with John Noble suitably menacing as Brainiac. It is a little too short and Supergirl is annoying at times.

Plot: Superman and Supergirl take on the cybernetic Brainiac, who boasts that he possesses “the knowledge and strength of 10,000 worlds.”

Review: As Man of Steel draws near there may be one or two Superman related things on the site, but fear not action fans, there will still be plenty of R Rated goodness to enjoy. Superman: Unbound is a new animated movie pitting the Last Son of Krypton against the legendary Brainiac.

As most people know Brainiac is the fiend who shrunk the city of Kandor on Krypton and stuck it in a jar.  I wonder if we’ll get to see this in Man of Steel actually; if you think about it, in the trailers there is a big ship hovering above Metropolis which could be Brainiac making an unannounced appearance, but I doubt it.

Anyway, Superman: Unbound is a measly hour and 15 minutes so it doesn’t have much in the way of character development. It does however have plenty of action and may be one of the more violent Superman stories out there.

There is blood spattering everywhere and Lois even gives Brainiac the finger in arguably the funniest moment of the movie.

Brainiac is voiced by none other than Denethor himself John Noble who has such a great voice; he makes the role his own and makes me pine for a live action movie where we finally get to see Brainiac as the antagonist.

I found Supergirl to be a whiny pain in the ass though and she kinda let the movie down; I was a big fan of Matt Bomer as Superman though. As I said before anytime I see an ad for White Collar I think “man, he looks like Superman”. I really should get a job in a casting department.

The music does the job and sounds heroic although obviously it doesn’t have THE tune, but I wasn’t expecting it to.

The final punch up between Superman and Brainiac is pretty epic and thoroughly entertaining. I’d maybe not let the particularly young kids watch it though as they may find it too violent. Make them watch Rambo 2008 or possibly Robocop and that will be far more appropriate.

Overall, Superman: Unbound delivers some pretty spectacular action scenes and a well paced story. It’s just a shame it’s so short and Supergirl has to be such a pain in the ass.