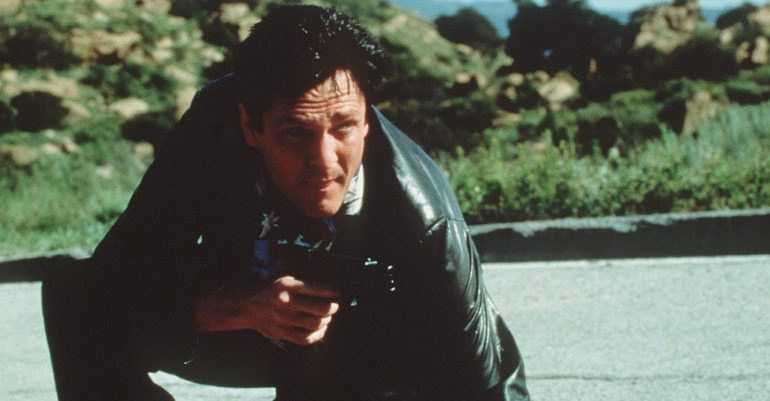 Supreme Sanction has its moments with Michael Madsen at his villainous best and Kristy Swanson making for an effective (and attractive) assassin but as it’s made for TV the action is rather forgettable so I’d not waste your time with it.

Plot: An assassin for the U.S. government becomes the next target of her employers when she spares the life of a nationally known TV reporter.

Review: I had never heard of this movie until I saw it pop up on the Fawsome Movies app a while back and with a cast that included Kristy Swanson, Michael Madsen and Ron Perlman I figured it would be worth a watch.

I didn’t know it was a made for TV movie, but you can tell within the first few minutes as it looks like it has a limited budget. There was some swearing in it so it wasn’t your average made for TV fare but there isn’t much in the way of action.

There are a few shoot-outs and it’s really only the last 15 minutes where things get going but the majority of the movie is just people talking or ogling Kristy Swanson. We do love our B movies here at TAE and Supreme Sanction is exactly that. The script is mostly forgettable but there were a few surprisingly funny moments mostly courtesy of Donald Faison’s hacker Marcus who has some choice lines.

Michael Madsen can’t help but be cool; that’s just what he does, and I liked how when we first see him, he is sipping a drink as a nice nod to his role in Reservoir Dogs. He makes an effective villain and goes full-on psycho in the final act even killing his own men.

Kristy Swanson deserved to be a bigger star; she was convincing in the role as assassin Jenna and I always liked her in the Buffy movie.

The late David Dukes (Rawhead Rex) plays reporter Jordan McNamara who has been targeted for termination after stumbling upon a nefarious C.I.A. plan. Jenna refuses to take him out and they end up on the run from the agency who want both of them silenced.

Ron Perlman is the man in charge and doesn’t really do much except threaten Michael Madsen for his failures, but he is as watchable as ever; Tommy “Tiny” Lister Jr. has a small role too but it’s always cool to see him as he has a great screen presence.

We’ve seen this kind of story so many times before so there isn’t anything that makes Supreme Sanction stand out from the hitman with a heart genre.

Overall, Supreme Sanction is forgettable fare with little in the way of action aside from a few shoot-outs; I love Kristy Swanson however, and Michael Madsen always makes for a fun villain. There are so many other better movies out there to watch instead so I’d give this a pass.