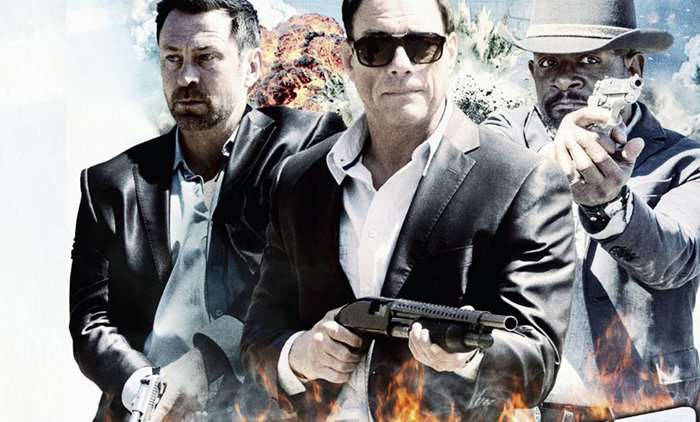 Swelter won’t be for everyone as JCVD is severely wasted in a very minor role and there isn’t that much in the way of action. However, if you’re looking for a modern Western with surprising humour then you might just have a blast.

Plot: In the vein of the brutal heist drama Reservoir Dogs, the modern crime thriller A History of Violence, and the classic western High Plains Drifter, SWELTER is a violent story of greed and retribution.

Review: First of all, if you think this is a “Jean-Claude Van Damme Film” you’ll be sorely disappointed; he has a very small role and literally only has a few lines.

There are no martial arts or big fight scenes and it’s really more of a modern Western than anything. It was actually frustrating to even have him in the movie as it was a total waste and it was the kind of role that anyone could have done.

This doesn’t make Swelter a bad film, just maybe not what you might think. The biggest surprise was how funny it is; Alfred Molina totally steals the movie as the alcoholic town doctor and every scene he’s in, he just owns.

The acting overall is excellent with a strong script too; I loved how in one of the scenes the car pulls up and the location comes up on screen: “The Middle of F**king Nowhere”. I burst out laughing and there were a few nice touches of humour throughout the first half. It does get a bit darker in the second half as everything goes pear shaped and bodies start dropping.

Lennie James plays the only really likeable character in the film; he was one of the original heist crew but after it went wrong, he got amnesia and doesn’t remember where he left the money. James is great at looking conflicted and does an American accent nicely too.

The rest of the crew are pretty nasty, especially Kane (Daniele Favilli) who has no trouble killing or raping anyone that he chooses. I should note that no one gets raped on-screen in the movie so don’t worry.

I loved the locations as well and personally Baker looked like my kinda town; I enjoy anything set in the desert so the movie get’s an extra half star just for that.

At 90 minutes it’s pretty well paced and although there isn’t any major action, it does have plenty of violence and there is even a climactic showdown ala the OK Corral.

Overall, Swelter won’t be for everyone as JCVD is severely wasted in a very minor role and there isn’t that much in the way of action. However, if you’re looking for a modern Western with surprising humour then you might just have a blast.