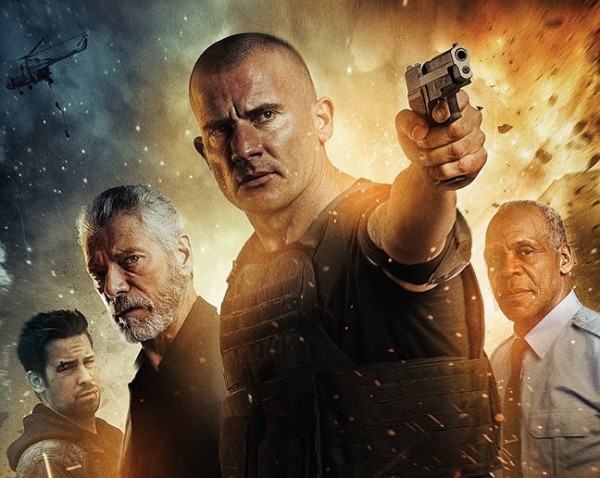 Gridlocked is one of the best action movies of the year with a hilarious script and plenty of action; it will surely break the record for most bullets fired in one movie too. A must see.

Plot: Former SWAT leader David Hendrix and hard-partying movie star Brody Walker must cut their ride-along short when a police training facility is attacked by a team of mercenaries.

Review: Gridlocked has been on my radar for quite some time; we did a set visit a few months ago so I was excited to see how the finished movie would turn out.

It makes its Canadian debut this week at the Toronto After Dark Film Festival and I can say without a word of a lie that it’s everything you could want from an action movie.

Bored with PG-13 movies aimed at children? Well Gridlocked is the answer. It’s hard R action with blood squibs and no noticeable CGI or shaky cam. It’s actually one of the most satisfyingly violent action movies I’ve seen in quite some time and is impressively slick.

Dominic Purcell is at his badass best and he really was born to be an action hero; he doesn’t say much but he doesn’t have to. He’s an old school kick ass, ask questions later kinda guy that has been sorely missing from action cinema recently.

Cody Hackman provides the laughs and is perfectly cast as the wayward Hollywood star; I was a little disappointed we didn’t get to see any of his martial arts skills but that’s only a minor niggle.

Vinnie Jones is, well… Vinnie Jones but Stephen Lang was suitably menacing as the villain.

Trish Stratus has her best movie role yet and gets her own fight scene towards the end. Every character has their moment to shine; we even get Danny Glover in a small role and yes, he does get to say that line which made me smile from ear to ear.

What I wasn’t expecting was how funny Girdlocked was; not just the dialogue but there is some great humour going on in the background too. There is a little news report towards the start and all I will say is read the ticker along the bottom. It had me in stitches and there are several moments throughout which are massively entertaining.

Gridlocked is a throwback to the era of great action movies (the 80’s and 90’s) with references to Lethal Weapon and a storyline that fees like a Die Hard flick with a side order of Assault on Precinct 13.

Although it follows a similar formula to other action movies, it doesn’t fall into the usual cliches and does something a little different, giving us memorable characters and time to get know everyone in-between the slaughter.

The final half hour is action movie heaven with shoot-outs, fist fights and awesomely brutal violence which should have you cheering in the aisles.

Director Allan Ungar is clearly someone who appreciates the classic actioners and I wish more modern filmmakers understood what it takes to make a decent action movie. With so many family oriented movies released in theatres these days I hope Gridlocked finds an audience and gets the exposure it deserves.

Overall, Gridlocked is one of the best action movies of the year with a hilarious script and plenty of action; it will surely break the record for most bullets fired in one movie too. A must see.