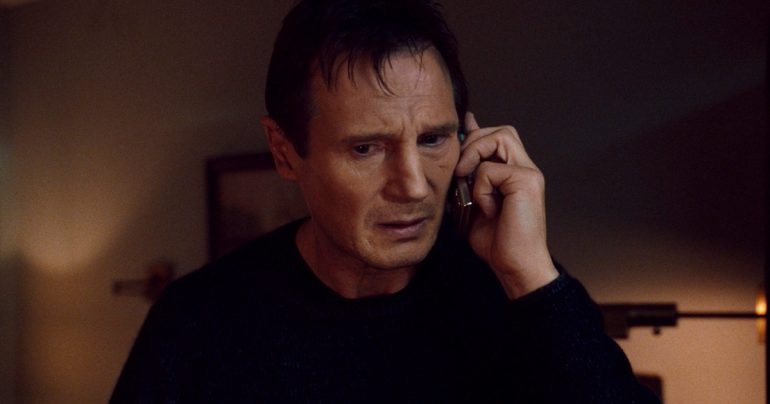 It was 10 years ago this week when a little Liam Neeson film was released in North America and took the box office by storm. Taken came out of nowhere and became not only a smash hit but also one of the most influential action movies of the past decade with a storyline that has been copied by practically every action movie since.

Interestingly enough Liam Neeson took the role after Jeff Bridges dropped out and Neeson apparently expected the film to bomb, but according to IMDB he signed on, in order spend four months in Paris, and learn karate, while playing the kind of role he had rarely been offered in the past.

Neeson plays Bryan Mills, a former government operative, who is trying to reconnect with his daughter, Kim (Maggie Grace). Then his worst fears become real when human traffickers abduct Kim and her friend shortly after they arrive in Paris for vacation. With just four days until Kim will be auctioned off, Bryan must call on every skill he learned in black ops to rescue her. Good luck!

Mills immediately springs into action and flies to Paris and will stop at nothing (even tearing down the Eifel Tower if he has to apparently) to save his little girl before she is lost forever.

I remember critics weren’t too kind to Taken and I particularly remember Empire’s 1 star review and they came up with some horseshit about how the movie portrayed everywhere outside of America as evil and that the movie was xenophobic despite being written, produced and directed by the French…

Another note from IMDB says that Liam Neeson has stated in interviews that the biggest misunderstanding that people seem to take from the movie is that Europe (and France in particular) is a place where young people are at high risk of being abducted by human traffickers. He has said that several American parents thanked him after the movie for warning them of the dangers, saying they would no longer allow their children to go an a trip to France. Neeson always takes time to explain that the dangers were highly exaggerated for the film, and tells parents that they should encourage their children to get out of the USA more often.

Although Taken was guilty of using fast edits during some of the fight/action scenes I thought it worked in creating a sense of chaos and tension with Liam Neeson at his badass best. You totally root for Bryan in his quest and as we all know human traffickers are the lowest forms of life so watching them die is always satisfying.

It is a perfectly told story with the first few minutes establishing the characters where we find out Mills is divorced and his ex-wife (Famke Janssen) is now shacked up with some other guy. This doesn’t deter Bryan from seeing his little girl Kim (Maggie Grace) on her birthday so he shows up at her party to give her a gift and she tells him that she is going to Paris with her friend to follow U2 on their concert tour. Mills is reluctant to allow her as he is incredibly over protective but when he eventually relents he is proven right and she is indeed taken.

This is one of the most intense action films of the past decade with nail biting tension and a genuine race against time as Mills tries to rescue Kim from a fate worse than death. As this is the type of thing that happens every day in real life with young girls being kidnapped it makes it all the more terrifying as it’s every parent’s nightmare but Taken shines a light on one of the darkest businesses imaginable.

Taken has arguably the best action movie speech of recent times with Mills picking up the phone to the villains stating “I don’t know who you are. I don’t know what you want. If you’re looking for ransom, I can tell you I don’t have money, but what I do have are a very particular set of skills. Skills I have acquired over a very long career. Skills that make me a nightmare for people like you. If you let my daughter go now, that will be the end of it – I will not look for you, I will not pursue you… but if you don’t, I will look for you, I will find you… and I will kill you.”

I so wish I had written that as it is awesome action movie dialogue and you know you have written something classic when it can be used for memes.

The Uncut Extended Edition of Taken is the one to get rather than the PG-13 cut that was released in theatres as this is more violent and just feels more intense.

The legacy of Taken includes 2 not very good sequels and a TV series which admittedly I have never watched but after 10 years Taken remains one of Liam Neeson’s best roles and redefined him as a modern action hero with tension-filled moments and an endless stream of goons that need killing.