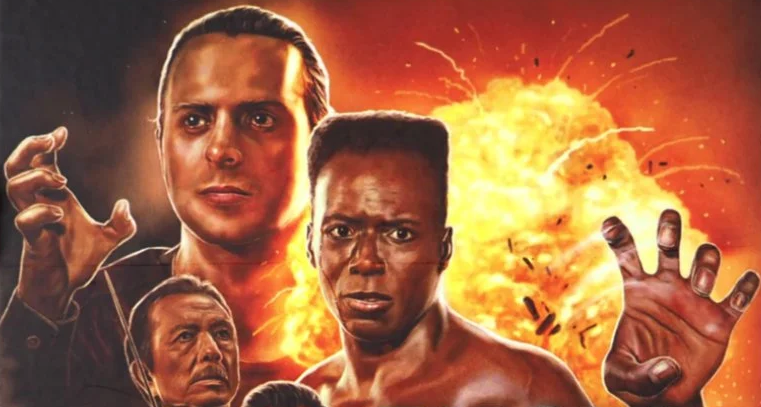 Talons of the Eagle is still a fun time with a great cast, plenty of fights, one-liners and nudity; the Vinegar Syndrome Blu-ray is well remastered and has enough features to be well worth adding to the collection. Now if we could just get Back in Action and Tough & Deadly I’d be a happy man.

Plot: DEA agent and martial arts expert Tyler Wilson (Billy Blanks) is sent on assignment to Toronto where he is tasked with trying to stop an influx of narcotics into the states. Once in Toronto, Wilson is partnered with Detective Michael Reed (Jalal Merhi) and the two undergo rigorous martial arts training in the hopes of entering a local fighting tournament and getting closer to a well-known drug dealer named Mr. Li (James Hong). After saving Li’s life, Wilson and Reed go undercover in Li’s gang in order to find the evidence they need to put Li away. However, their martial arts training will be put to the test when Wilson and Reed try to take down Li’s syndicate and the two are forced to fight for their lives.

With explosive action sequences and well-choreographed fight scenes, TALONS OF THE EAGLE remains one of the best from action producer Jalal Merhi. Featuring high-octane martial arts performances from Billy Blanks (TC-2000) and Jalal Merhi (Expect No Mercy), as well as solid performances from Priscilla Barnes (Three’s Company) and the always enjoyable James Hong (Big Trouble in Little China), Vinegar Syndrome Archive is proud to present TALONS OF THE EAGLE for the first time on Blu-ray, scanned in 4k from the original camera negative.

Review: Set in the hard-hitting streets of Toronto (they really aren’t) Talons of the Eagle is one of my favourite Billy Blanks movies as it really delivers anything you could want from a 90’s action picture. It has fight scenes every few minutes, regular gratuitous nudity and we even get to see Blanks in his first (slightly awkward) love scene. He and Jalal Merhi discuss it in the documentary on the Vinegar Syndrome Blu-ray which is consistently informative and entertaining.

I like how in the interviews the cast are all honest knowing that they are martial artists first and actors second so you can forgive the odd ropey performance and just enjoy the ride. Blanks and Merhi make for an entertaining duo trading banter in between all the (still impressive) beatdowns. The cast do the majority of their own stunts which always helps to make the action feel more authentic.

The great James Hong never disappoints and he is so perfect as the villain Mr. Li who runs a fighting tournament in Toronto; our two cops go undercover to infiltrate his organization but his henchman Khan (Matthias Hues) suspects a rat. You know within seconds that Hues and Blanks will have a showdown at the end and it delivers the goods with a truly explosive finale; it’s always nice to see real martial artists do action scenes so we are allowed to see everything without things like shaky cam to take you out of it.

The supporting cast includes Priscilla Barnes as Cassandra and Harry Mok as Niko; he has one of the best fight scenes of the movie with Billy Blanks in a kitchen where he uses butterfly swords and it still looks awesome today. Mok sadly passed away last year but he gave a great interview on this Blu-ray about the making of the film and it sounds like everyone involved worked hard but still had a fun time.

The music score is perfect with electric guitars for the action scenes and some bluesy jazzy cues for the quieter moments so it’s pure 90’s awesomeness.

The other special features include the original trailer, an enjoyable audio commentary from Jalal Merhi and a cool double sided poster; the Blu-ray is Region Free too so it should work on any players worldwide.

Overall, Talons of the Eagle is pure old-school action with one-liners, constant fight scenes and two appealing leads in Billy Blanks and Jalal Merhi; the bonus of James Hong, Matthias Hues and Harry Mok just add to the entertainment factor. Vinegar Syndrome deliver another nicely remastered Blu-ray with decent picture and sound and subtitles too making this a must-have if you grew up watching movies like this like I did.