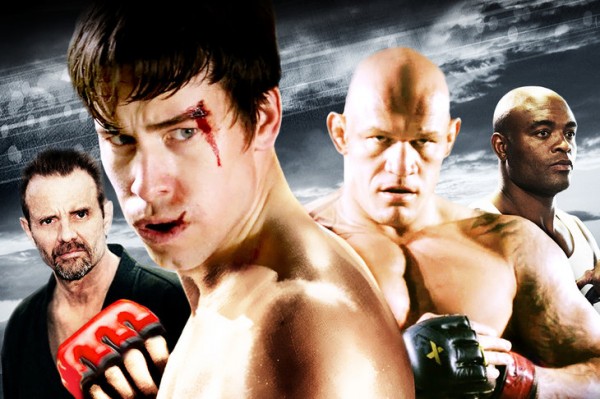 ‘Tapped Out’ is ‘The Karate Kid’ for a new generation with a great cast, nicely choreographed fights and an inspirational and entertaining story.

Plot: A disgruntled teenager, sent to do community service at a rundown Karate school, enters an MMA tournament to face the man who killed his parents.

Story-wise it’s ‘The Karate Kid’ meets ‘Rocky’; our protagonist Michael Shaw (Cody Hackman) witnesses the murder of his parents as a young boy and becomes (unsurprisingly) a troubled youth.  Unlike the Never Back Down films though, Michael is a likeable character and although he is angry at the world, it’s entirely understandable as he is well fleshed out.

He starts off the movie hanging around with a bad crowd at school and having crazy parties, but then becomes the underdog and rather than being someone you don’t care about, he is a man of honour.

One of the little things I noticed was him bowing before a fight and someone says “young people don’t want to see karate anymore, they want to see this” *pointing to the cage fighting*.

Cody comes from a martial arts background so when we see him fight, it doesn’t look overly choreographed but believable.

One thing to be prepared for is that it’s not constant action, with the first half of the movie focusing on character development, drama and story. The second half of the movie is tournament time and that’s when the action really kicks in.

Michael Biehn plays Reggie, the Mr. Miyagi-type mentor of the tale who has his own back-story which I won’t go into here. Biehn is always phenomenal on-screen and never seems like he’s acting; he just has a truth to every character and when watching this, you’re not watching an actor, you’re watching Reggie.

Martin Kove plays against type as the inspirational Principal Vanhorne who wants to straighten out Michael and send him to Reggie; he doesn’t have a very big role but it’s great to see him in this type of movie as a good guy.

UFC Fighter Krzysztof Soszynski is the villain of the movie Dominic and he REALLY looks the part; when he’s on screen he’s pretty damn scary looking and is threatening as Hell. He brings real authenticity to the role and his fight scenes are vicious… and usually short. He’s a very memorable villain and may end up being seen as a classic bad guy.

Speaking of the fight scenes, I’m pleased to say that they are shaky cam free with fluid camera work but also not afraid to get up close to the action. We get to see every punch and kick and it isn’t watered down; when Dominic is fighting, he pounds his opponent’s faces in and usually leaves them out cold.

There is a reference to ‘The Karate Kid’ in the movie but nothing cheesy and that’s one of the main things I enjoyed about ‘Tapped Out’. It manages to be an inspirational tale without being cheesy or having any clunky dialogue. The characters are believable and although the story isn’t anything all that new, I found myself enjoying every moment.

There is plenty of humour too in the form of Lou (Daniel Faraldo) who arranges the fights and has some choice lines; when he sees what Michael can do in the ring he turns from cynical to a fan very quickly.

We also get a few awesome training montages which are essential for films like this but in this movie we get to see UFC legend Anderson Silva teach Michael how to properly cage fight and mix up his fighting style. He’s only in a few scenes but he has a great career ahead of him as an action star as he has a very likeable face and plenty of fighting skills… obviously.

‘Tapped Out’ is director Allan Ungar’s feature début and from this evidence it looks like he is going to have a great career. With a new action movie called ‘Gridlocked’ on the way, I’m looking forward to seeing what he does next.

Overall, ‘Tapped Out’ is ‘The Karate Kid’ for a new generation with a great cast, nicely choreographed fights and an inspirational and entertaining story.