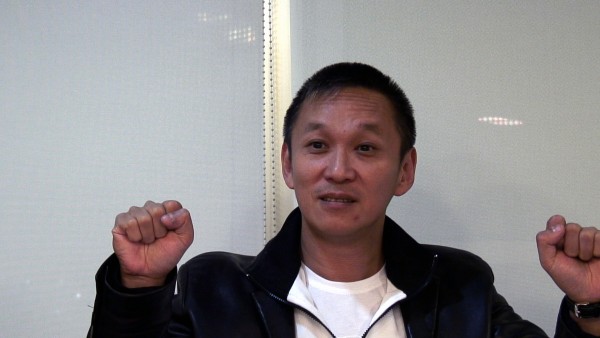 Teddy Chen Tak Sum (陳德森) is a Hong Kong film director, producer, writer and actor. Having previously worked with Donnie Yen on the 2009 feature Bodyguards and Assassins and The Accidental Spy starring Jackie Chan, he has had acting roles in Infernal Affairs 2 and Kung Fu Killer.

Here, he exclusively talks with The Action Elite about the new martial arts actioner that he directed, Kung Fu Killer:

The martial arts in this film were fantastic. How did you decide which to focus on?

Top level martial art can’t be limited to only punching or kicking. After discussing with our creative team, we decided to incorporate five styles, which are boxing, kicking, grappling, qi and weapons, so that presentation of martial arts in this film is more complete.

I make sure every actor in this film is able to perform martial arts. That was my principle for casting. For example Yu Kang has always been Donnie Yen’s assistant action choreographer. Other actors are martial arts actors I’ve been familiar with. I’m very grateful and I want to take this chance to thank all of them. Some of them couldn’t make it because they were abroad or were shooting other films, but most jumped right on board once they heard we wanted to pay tribute to Hong Kong Kung Fu films, even without discussing payment.

The action choreography was first rate. How did you manage to make everything look so real?

I leave it up to our action director. All the action scenes are carefully planned out in advance. and my requirement is that martial arts masters use deadly techniques. It also relates to the film’s central topic, whether or not martial arts are for killing people. Wars gave rise to the birth of Kung Fu, so Kung Fu is used for killing. I asked our action directors to emphasize this point when they design the fights.

What was your vision for how the highway scene was executed?

The fights prior to that one are very exciting. In the final fight, the killer uses all five techniques, boxing, kicking, grappling, qi and weapons. But at that point, only Kung Fu moves might not satisfy an audience. So I told the action directing team led by Donnie Yen that in this scene the two characters are like fighting in water filled with sharks, so they not only have to kill each other but also have to avoid being killed by sharks swimming around. That was my idea for the final fight.

How important was it to work with  Donnie Yen on this movie?

I wanted to make a great Kung Fu film, a modern Kung Fu film and there are lots of excellent action stars in Hong Kong. For me, Donnie Yen has traveled and participated in quite a few action films, so he has rich experience shooting action and knows very well about leading edge technology. What he has to offer is exactly what the film needs. We know each other well and I believe he can help me bring my vision to reality.

Do you have any interest in participating in making a high budget Hollywood film at all?

Ever since I started, knowing what I want from film-making, the motifs of my films have been universal. The stories can happen in any country in the world. The story in this film could have happened in the U.S. Someone good at boxing loses his mind and becomes a serial killer. Or it can happen in Japan to someone who practices Karate. Every time I work on the script, I feel the story can happen anywhere. As long as the script is solid, I welcome collaboration with teams from any country. Budget comes after a good story. Story for me is most important.

As a Kung Fu fan, what are your feelings about making these films?

I want to make more Kung Fu films if I have more opportunities. Chinese Kung Fu is not only about bringing your enemy down, it also has lots to say on what kind of person you should be. Every school also has its own code of ethics. I want to be able to tell stories of these masters. The films will be about people not about fights.

Having said that, would you be interested in exploring any other genres?

One of my favourite directors is Steven Spielberg. He can make Jaws and he can also make Schindler’s List. I want my filmography to be that diverse as well, so I don’t want to label myself as an action director. My next project could be a comedy, a horror or even a detective thriller.

How long did it take to plan and make the film?

Pre-production took the longest. It took me a year and a half to come up with the script. Shooting took about 100 days and the post-production process was a long one – it took more than a year.

What inspired you to make “Kung Fu Killer”

I have been practicing Kung Fu since I was a child. I went to school in Taiwan when I was little andI learned Xingyi, Tai Chi and Bagua when I was a high schooler. Back in elementary school I learned Japanese Judo. In recent years I also started practicing Wing Chun. I learned many styles, but I had a car accident a few years ago and my was hand injured, so I can no longer fight. I think Chinese Kung Fu is not about bringing your enemy down, but how you become a decent person. The more you explore the Kung Fu world, the more you discover. Every school has numerous styles; for example Bruce Lee’s Jeet Kune Do. A small move can have so many deep meanings. That’s what inspired me to make “Kung Fu Killer”. Right now many Hollywood action films heavily utilize special effects. They create worlds that don’t exist in reality. Our digital technology might be far behind and there may be a long time before we catch up, but Hong Kong Kung Fu films are still popular even among a western audience. I hope my films are seen by not only Chinese audiences but audiences around the world, so I decided to make a Kung Fu film.

What was it like working with two Shaolin masters Wang Baoqiang and Shi Yanneng?

It was great to work with them. They are both very professional and during shooting Wang Baoqiang fought very very hard.

The film discusses “ethics of Kung Fu practioners”. Can you talk more about this concept to audience who might be unfamiliar with it.

Wang Baoqiang’s character Feng Yuxiu thinks Kung Fu is for killing. His belief is almost ancient, but Donnie Yen’s character thinks otherwise. He believes nowadays Kung Fu has many other functions. Characters who become killers, get lost in their pursuits of achievements in martial arts and are not without causes. Some of them are mistreated by parents. Some of them experience unimaginable sufferings. Feng Yuxiu is handicapped. He is always bullied by others. So he learns martial arts to protect himself. He works too hard and finally loses his mind.

Characters are complex instead of simply good or bad…

What do you want to tell North American audiences about the generations of cast and crew who devoted their careers to Hong Kong Kung Fu films?

I’m paying tribute to them. Starting in the 1960s, their hard work helped Hong Kong Kung Fu films become a world known genre, but many also got themselves injured because of their jobs, some even lost their lives. Audiences might only get to know faces on screen such as Donnie Yen and Wang Baoqiang, but few get to learn about people who worked behind the scenes to make these films happen. I’m doing this for them.

Many Chinese language films are only seen via home entertainment. What does a theatrical release of this film in the U.S. mean to you?

I hope American audience like this Chinese Kung Fu film. I hope they not only watch the fights but also get its message and understand what learning Kung Fu means. This is very important since I know many people in the U.S. practice Kung Fu.

It’s been 5 years since your last film came out. How has your film-making evolved?

I treat every film I make as my first film and my last film. I forget all praise and critiques my previous works received. I constantly look for new stories and make films like I’m a newcomer. If I screw up one film there won’t be another one. That’s my principle.

Does action in your films supplement the story?

Digital effects and action scenes can only be supplements to a good story. Story is always the most important. No matter how good your action scenes are, if your story doesn’t make sense nobody will want to watch it. I’ve seen too many films in which characters fight for no reason. Characters have to fight only when the story needs them to.

What do you think is the Kung Fu genre’s future while there are so many films selling explosions, gunfire, etc?

I believe there’s a future for Kung Fu films. There are countless masters in Kung Fu history. What we need to do first is dig deep into these figures and create complex characters based on them. These masters beat numerous rivals to become who they are and established their own styles. These are all fascinating stories. We need to develop them into exciting films audience like to see.

Thanks you for taking the time to answer our questions and all the best with your future projects.