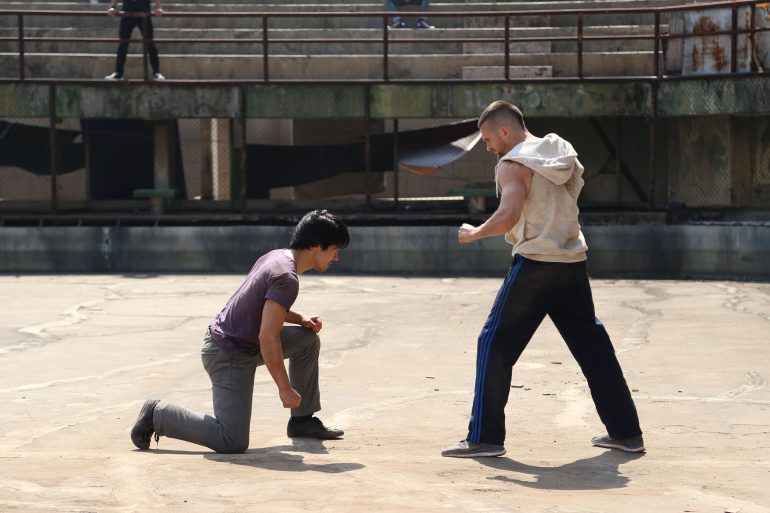 Kazuya’s Revenge has plenty of great fight scenes and Kane Kosugi is, as always likeable but the forgettable story and lack of any real emotion or tension make it one possibly for rental only.

Plot: Suffering from amnesia, a young man trying to discover his true identity is kidnapped by an underground crime organization and turned into a ruthless assassin.

Review: I always thought the Tekken games were about the King of Iron Fist Tournament, then I realised that this is actually a prequel to the first movie and it’s set before the tournament… which I’m pretty sure no one really wants to see.

That’s not to say there isn’t plenty of action though; as an outsider (who isn’t much of a gamer) looking for an entertaining martial arts flick, you could do worse than Kazuya’s Revenge. Kane Kosugi is as awesome as always and his fighting skills are a joy to behold. The fights are choreographed to perfection and there are enough of them to make it a fun watch.

It also has a small but pivotal role for Gary Daniels who returns to play Bryan Fury; he has a great fight scene with Kane which is one of the action highlights. The best fight scene though is at the end with Kane Kosugi taking on Brahim Achabbakhe and Ron Smoorenberg. Fluid camera work and martial arts moves that will give you a sore back by just watching are the order of the day and it’s certainly one of the best fight scenes of the year.

Sadly, the story like I said has little to do with Tekken and despite Kane Kosugi’s awesomeness you don’t really care what happens and it lacks any real tension or threat. I won’t lie, I actually had no clue what was going on by the end and had frankly stopped caring; I was just there to watch some fights and that was fine.

Rade Serbedzija plays a villain called The Minister who keeps forcing people to fight to the death or he’ll make them explode; that’s literally what he does. I always like watching him on screen although a bit more back-story to The Minister would have been interesting. I didn’t like or hate him, he was just there.

Some of the female supporting cast weren’t the greatest actresses in the world either with some poor line delivery; not the worst I’ve ever seen but rather wooden.

Cary-Hiroyuki Tagawa seems to be the master of the video game adaptation, having key roles in this and Mortal Kombat. He only has a small part in Kazuya’s Revenge and I wish he had more to do but it looks like it’s very much open for a sequel. Wait, if this is a prequel and we get another movie, is that a pre-sequel, sequel prequel? uhh… moving on…

Perhaps it’s time for Tekken to go the route of Street Fighter: Assassin’s Fist and have its own web series made by people who are fans of the games. Keep Kane as the lead and the same supporting cast but let’s just get to the tournament, which is what we all want to see.

Overall, Kazuya’s Revenge has plenty of great fight scenes and Kane Kosugi is, as always likeable but the forgettable story and lack of any real emotion or tension make it one possibly for rental only.