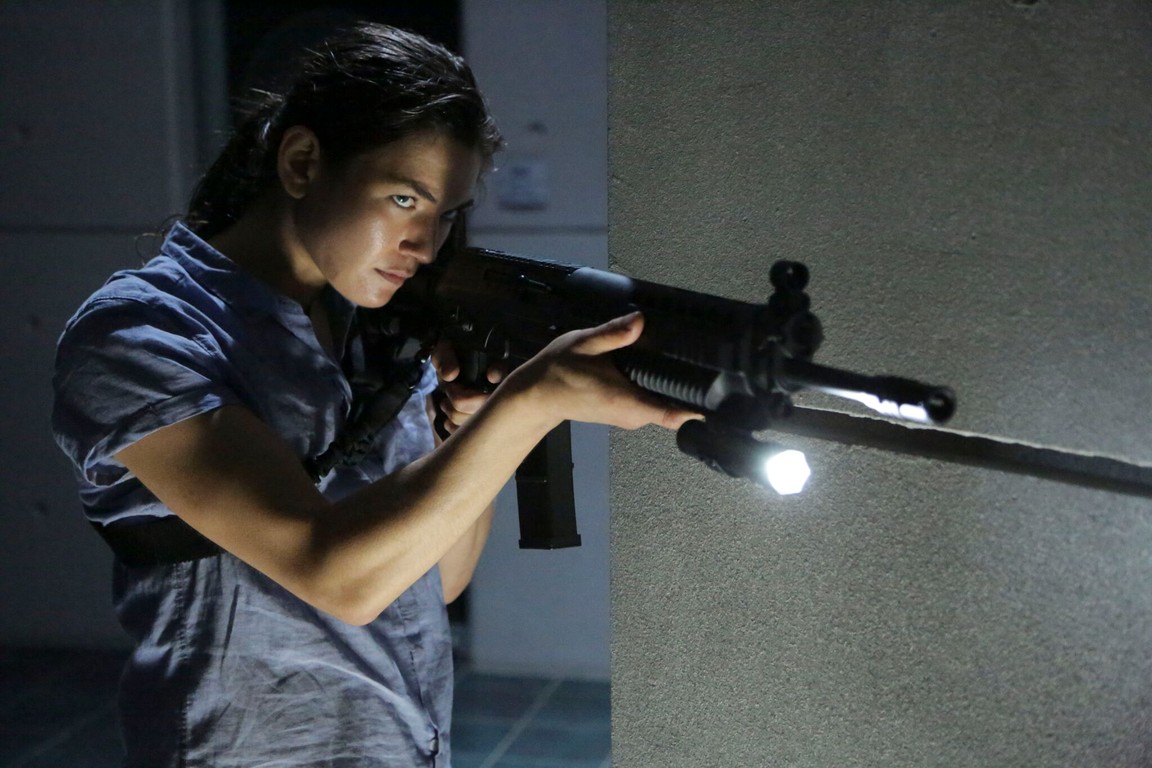 Teri chats with The Action Elite about the new action thriller.

You play the character Vasquez in Black Site Delta; what appealed about her & how did you get involved with the project?

Well, the director and I go all the way back to undergraduate school and he directed me in a play when we were 18. He was a fantastic director back then; fast forward many years later (I won’t say how many) but he had done a bunch of short films and he had this project he approached me about. He also knew that I had been studying martial arts and had an action/fighting background which the character in this piece called for. After reading the script and the part of Vasquez it was a no-brainer for me to say yes to work with Jesse. The character herself, I’m just a sucker for a strong female and a woman who can hold her own and isn’t afraid to be who she is even amidst terrifying circumstances. So that drew me to her but also the opportunity to do some stunts and get my hands dirty.

She was my favourite character in the film; I loved how she was unpredictable and was the last thing you were expecting to see coming out of that dark prison cell.

I’m so glad you were drawn to that; the whole setup of that scene was great where you’re not sure what’s behind that door. Is it a monster? No, it’s a girl… who can kick your ass (laughs).

Would you say she is one of your favourite characters that you’ve played?

I’m gonna go with yes. Absolutely. I love how she has the troubled past so it’s very clear why she is the way she is and why she has this internal struggle. It’s so fun for an actress to play someone with something cooking on the inside that really manifests itself on the outside. So I loved that and again any time a strong female is available to me then I’m always interested; I started my career playing victims and I think the more we see strong women on our screens the more we see our own strengths and we can move away from just playing victims.

Did your training in jiu jitsu come in useful for this role and did you have to undergo any new training?

I have a brown belt and it’s a grappling martial art where you are on the ground a lot doing chokes, arm bars and getting away from opponents. I do it in my regular life just for me really because it’s the best self defense for a female with a beautiful community of people and it’s also a beautiful art. The stunt guy for this film James Logan is just incredible; he was able to craft the action scenes for my skill-set. We had real special ops guys there who taught us how to hold and shoot the guns as well as run with them. I took some boxing classes and James would run through the sequences which were basically dance sequences until they got all the action stuff right. The fact he was catering it towards my natural tendencies was a real gift.

Has learning martial arts changed your life or the way you see the world? For example has it made you more confident?

How would you describe Jesse Gustafson’s directorial style?

Jesse is very much an actor’s director but he really knows what he’s doing with getting a shot and he’s a really visual guy. So he was able to speak to his actors; he speaks emotional language and knows things that trigger us and get us fired up. He also put us in our best light by the way he would set up a shot or that sort of thing. When working on an independent feature you can be working really long hours and dealing with all kinds of problems but Jesse kept his energy positive, kept solving problems and kept everybody on board so he was a great cheerleader at the same time. I just felt an incredible amount of trust for him and felt totally safe in his hands while shooting this movie.

What was the toughest day of the shoot?

We were shooting in a real emergency response centre in the middle of Mississippi and we were shooting over night; we had to get all of the shots that night as it was our last chance. So we went over about 13 hours of shooting and I actually remember standing against the wall after those 13 hours overnight running around, carrying guns and I had the M4 flung across my shoulder and I fell asleep. I was standing and they’re like “Teri! Teri! One More Shot!” so I went in but I don’t remember doing it. I just remember being half asleep during the take that they used (laughs). I was totally delirious but where I can laugh about it now at the time I was wondering if I was going to make it through this. Then you do and you have a laugh and you’re like “OK this is real acting!” So yeah there was that one long day…

Do you find working on a smaller picture like this that there is more freedom to improvise if there still a strict schedule?

Yes there is a freedom; indie film is more collaborative because you’re all in it together. TV is fast moving where you trust the powers that be; they plug you in and that’s still fun. With independent film you’re creating a whole beginning/middle/end story together so it’s more collaborative. As far as freedom goes yeah, because when you’re collaborating with people your voice gets heard and you can really have a back and fourth with the other actors and director. The writer happened to be involved on set so we were even allowed to mess around which is an incredible gift. But you’re also under time restraints because you don’t have a lot of budget so you can’t get too crazy.

Black Site Delta had a few references to classic actioners like Aliens with some character names like Vasquez and Hudson, a Con Air reference where Cam Gigandet has a teddy bunny and a nod to Suicide Squad/Dirty Dozen. Did I miss any other references?

Ah you got the references! You’re the best audience member as you got them!! In fact, you got one more than me ! (laughs)

When you receive a script is there anything particular you look for in a character?

I look for a character that scares me to play and gets my empathetic juices going. The scary thing is when I look at a character and think “Gosh, that’s complicated or that’s really hard” but my brain says I should try it as it will expand me as an artist and a human, putting myself in someone else’s shoes. There’s that part of me that has to have that little bit of understanding of who they are and why they tick. Those are the people I’m drawn to as I have a way in to understanding them. Other than that I love all genres and styles.

What do you want audiences to take away from Black Site Delta?

That’s a great question; I haven’t had that one yet. I want people to take away that it’s important to stand up for what you believe in and fight for what you’re passionate about and be a good guy no matter the circumstances you’re in. You may get struck down but it doesn’t make it any less worth it because you could be changing someone’s life including your own. So never back down from defending the good guys.

I play a ghost hunter in a film that’s coming out, a sci-fi film, a vampire film and I have the recurring role as Dorothy Gale on Once Upon a Time. So I’ll keep looking for the next fun projects…