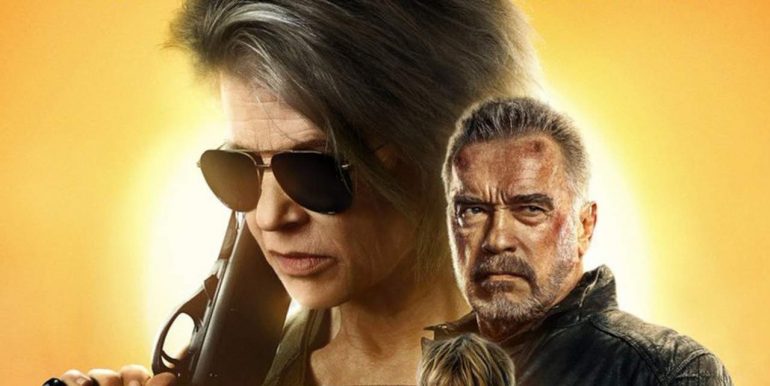 Terminator: Dark Fate may not be perfect but it’s the best Terminator sequel since Judgment Day and the return of Linda Hamilton as Sarah Connor is worth the price of admission alone. It’s packed with action and watching Arnie firing a huge gun again takes me back to the golden age of action and a time when my knees didn’t hurt as much as they do now.

Plot: Sarah Connor and a hybrid cyborg human must protect a young girl from a newly modified liquid Terminator from the future.

Review: It’s no secret that Terminator 2 is one of my favourite movies of all time if not my absolute favourite; despite having some entertaining moments every sequel since has failed to capture the magic of the first 2 Terminators and the trailers for the latest movie which is the “real” Terminator 3 didn’t exactly blow me away but the return of both Arnold Schwarzenegger and Linda Hamilton guaranteed my interest. Reviews have generally been positive stating that Dark Fate is indeed the sequel we’ve been waiting for and I’m pleased to say that they are correct.

Dark Fate is packed with R-rated action from start to finish and moves along at a frantic pace but still gives the characters time to develop and I found myself rooting for them all. Mackenzie Davis plays Grace – a half human/robot hybrid who is much the same as Marcus from Salvation. Davis is incredibly sympathetic and is immediately appealing so we are never in any doubt that she is a complete hero. Then we have Natalia Reyes who plays the new target of the Terminator Dani and her transformation throughout the movie from scared girl to warrior woman doesn’t quite reach the depths of Linda Hamilton’s arc in the first two movies but she is still a great character we can get behind.

But what of the greatest female badass of all time? Well, this is Linda Hamilton’s movie and it’s wonderful to finally see her again in her most iconic role as Sarah Connor. She’s every bit as tough (and barely sane) as she was in T2 and brings the fire and personality to the movie; she has the best dialogue and her scenes with Arnold are pure gold.

Arnold sadly doesn’t appear until over an hour into it but he still gets plenty to do including having several throwdowns with the new Terminator played by Diego Luna. I’m not sure how I feel about the whole “Carl” thing and as Sarah says “I’m not gonna fuckin’ call you Carl” and I have to agree; the scenes with him talking about drapes were meant to bring some levity but I hated them and it’s hard to believe this is the same Terminator model that we were scared of in the first movie. It’s only brief though and thankfully the tone generally is spot on feeling mostly serious with a few moments of humour much like T2.

Even from the trailers I could tell Diego Luna wasn’t remotely threatening as the evil Rev 9 Terminator; I’m not sure why I didn’t buy him but it may have just been the sub-par special effects so this new model Terminator wasn’t really any different from the T-1000. Ohh he can split in two; who gives a shit? I just wish there had been a little more innovation on that front. The visuals are at least better than they looked in the trailer but why is the CG not as good as it was in the second movie? It looked a little too video game-ish and during some of the action it lacked the weight to be convincing. I hate scenes in movies which are meant to be set in the real world where people (or Terminators in this case) defy gravity and move unnaturally as it just takes me out of the scene. I found the visuals in the second half vastly improved though and the finale looked great and had a thoroughly satisfying ending.

Unfortunately I read a few leaks a couple of months ago which were sadly true and they ruined a few surprises for me so in future I must remember to avoid reading such things as it only spoils the enjoyment… so THAT’s why they are called spoilers.

This movie does take a few liberties with certain characters and fans of one in particular may be annoyed with how they are handled. Storywise it’s nothing new either and is more of the same with the gang running away and hiding from the Terminator but it’s a formula that works and the audience I watched it with were cheering out loud at several points.

But what of the most important aspect of this movie? The music!?! Well, Junkie XL is on scoring duties and thankfully he finally brings the theme tune back which is used a few times but it’s at its best during the end credits. It’s not as scary and sad sounding as Brad Fiedel’s version but it’s the best we’ve had since 1991.

Director Tim Miller showed up at our screening and did a brief Q and A which was awesome and a nice surprise; it sounded like he had a ball making this movie and got us all pumped up to see Linda and Arnie on the big screen again. The movie was in IMAX and that’s how to see an action movie of this scale as the visuals and sound quality were at their best.

Overall, Terminator: Dark Fate is the best sequel of the series since Terminator 2 and is a welcome addition to a franchise which has struggled since 1991. Sarah Connor is back and better than ever and even despite the film’s flaws it’s still action-packed and a movie I will happily return to again over the years.