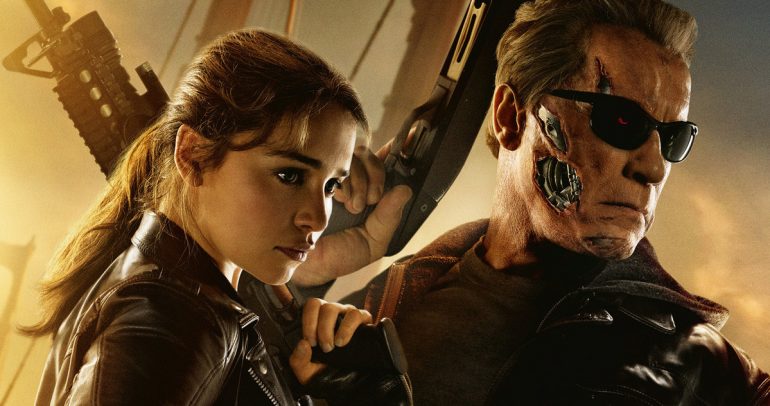 Terminator Genisys is arguably the worst of the franchise with Arnold just providing comic relief (which is never funny) and Emilia Clarke and Jai Courtney being boring. Just watch the first two movies again or even Salvation and let’s just forget this exists.

Plot: When John Connor (Jason Clarke), leader of the human resistance against Skynet, sends Kyle Reese (Jai Courtney) back to 1984 to protect his mother, Sarah (Emilia Clarke), from a Terminator assassin, an unexpected turn of events creates an altered timeline. Instead of a scared waitress, Sarah is a skilled fighter and has a Terminator guardian (Arnold Schwarzenegger) by her side. Faced with unlikely allies and dangerous new enemies, Reese sets out on an unexpected new mission: reset the future.

Review: I went into Terminator Genisys with zero expectations; the trailers were generally terrible and I was almost reluctant to see just how bad this was going to be so it didn’t really disappoint in that respect.

There is very little to like about this film and it’s a million miles from the dystopian tone of the original two Terminators; every single action scene has to have a shitty, unfunny one-liner which takes away anything resembling tension.

Emilia Clarke was hideously miscast as Sarah Connor lacking any kind of empathy and at no point did I care about her character. She didn’t even come across as tough, just a pain in the ass. I was actually on the side of Skynet for this movie.

Jai Courtney brings his brand of blandness to the normally intense character of Kyle Reese displaying no personality whatsoever; Reese is supposed to be this desperate future soldier who has lived a hellish existence. He was kind of wiry looking and Michael Biehn has this crazed look in his eyes where you questioned if he was in fact insane after all. In this movie he has abs and perfect teeth never looking like he has been in a single battle in his life.

Arnold Schwarzenegger returns as the Terminator which was sent back in time to protect Sarah Connor rather than kill her. Instead of being an emotionless killing machine he is now called “Pops” by Sarah who sees him as a father figure. This is easily the worst idea of the entire franchise thus far and the Terminator is now basically just a joke. You can’t help but feel like they are shoehorning Arnie into the story especially trying to justify why he looks older.

I used to want to see Arnie come back as the evil T-800 but why bother? We’ve already seen it and he’ll never better what he did in the 1984 classic. I don’t see any way to keep this franchise relevant as these new movies lack the grit of the first two which will never be captured again.

The first 30 minutes are set during the future wars and is what we as fans want to see; basically, the opening scene of Terminator 2 as an entire movie with a real sense of terror and dread. Of course we never get that and it doesn’t take long for Genisys to go into the overly complicated time travel plot.

The music score from Lorne Balfe incorporates Brad Fiedel’s iconic theme at the end and a few times throughout the film but it’s mostly forgettable like the movie itself; there is nothing you’ll give any thought to after watching Genisys aside from “what did I just watch again?”

Byung-hun Lee was wasted in a small role as a T-1000 which we’ve all seen before and that’s the problem with this movie. At no point will you think “Wow, I’ve never seen anything like that before!” Remember after seeing Terminator 2 for the first time and Robert Patrick’s T-1000 morphs through the bars at Pescidero Mental hospital? It was new and exciting. Nothing in this movie will make you think that as it is just more of the same. Every action scene is done with CG overload and there is very little that ever thrills or excites so by the time the credits roll you’ll feel hollow.

I was watching Terminator 2 recently (as it’s one of my all-time favourite films) and you sometimes forget how masterful Cameron was at directing those movies. He brought heart and soul to the story but also had some humour, just not too much. The script was really lacking in Genisys and it didn’t have really memorable lines like “if a machine can learn the value of human life, maybe we can too.”

I hated what they did with the character of John Connor which was ruined by the trailers anyway but it’s like they don’t know what to do with him. Here’s an idea, show us the final future wars and what he does to actually stop Skynet once and for all.

Overall, the first two Terminator films will always be the best and so far Salvation is the only other sequel I thought had some interesting ideas. It at least attempted to show us the beginnings of the future war and I would have liked to see where that went rather than filmmakers constantly trying to reboot the franchise. Genisys is a generally horrible movie which is only redeemed by the first 20 minutes set in the future but the rest is as lifeless as the Terminators themselves.